It's exhausting. Finding the energy to be outraged all over again. Let alone motivated to take action  -- and what action would that be? What did we do in the post-Reagan age? We did a lot of marching in the street, rallied in DeeCee. (Gotta remember to get my walker oiled!) That was specially during the time -- the first Bush -- when the President was publicly siding with Right-to-Life extremism for the elimination of Roe, and the US Supreme Court was considering Webster v. Reproductive Services (1989) and Planned Parenthood v. Casey (1992). I remember being at three big rallies and marches, including the march in April 1992 past the White House, with smart alecks chanting "Free Barbara Bush" and some others -- many, including me -- throwing tennis balls over the White House fence and yelling "Giving George Bush back his balls!"

All that street activity likely had nothing whatsoever to do with the Court's reaffirming the fundamentals of Roe in Casey, but maybe? Only an ideological thinker (here come de Judge!) of very brittle steel would fail to see the widespread harm he could cause, or to care about it. And vote accordingly.

Since Trump unleashed what has always been locked in the frozen tundra of the "American character" --a burning intolerance for anyone in the way -- it's been "balls to the walls" to end the progressive era, from DeSantis in Florida to the big-haired woman who likes to disrupt the school board. Trump thawed out the mastodon of frank jingoism (which couples nicely with a self-interested politician with a talent for stirring hate). Since Trump, it's authoritarians and bullies everywhere across the American landscape, bent on bringing back their strongman leader.

Voting rights? Harder to attain in many states, especially for the young, the brown, and the Black.

Iron control not only over elections but over their tabulations? (In some states, but still)

How we got here, see, was the failure of whole swaths of citizens to vote, -- or to while away their time with such contenders as Gary Johnson and Jill Stein, or sit at home and complain "I don't like either one of them but especially her, ... and anyway, there's no difference between the political parties." Meanwhile, O my cool ones, a corrupt bossman seizes power and calls for a renaissance of selfish greed, for which there's talent all over the place for aping his style of demagoguery. They mean to tear the house down, with us in it. 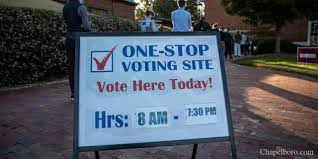 What do you get when you let a Trump take over? A Supreme Court that has a 3-out-of-5 majority -- Neil Gorsuch, Brett Kavanaugh, and Amy Coney Barrett (the dead-eyed one) -- who knew they were destined by history to be a part of overturning a fundamental right of women, yet said the opposite to the Senate committee examining their character. They give the power to Alito and Thomas to finally get their wet dream.

It's time, folks, to get back in the street. (And to goddamn vote in these midterm elections.)

Grateful thanks to you, sir, from the brave little state of Vermont (long-time reader of yours from ago-when-I-lived-in-NC).

...Women will kinda-sorta be okay up here in this bluest of blue states--but I weep, quite literally, for women elsewhere, especially the young, the poor, the powerless. Felt more helpless sorrow for my country in the last 6 years than in the previous almost-60... where are we going as a nation? What can we effing DO, against the loss of decency and compassion?