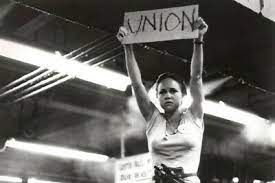 Recently, Boone’s Starbucks became the first Starbucks in the state of North Carolina to unionize. An excellent piece of news and one that fits into Appalachia’s long legacy of labor movements, it’s fitting for Boone to lead the way in this effort.

While you’d expect support from the working class of our community, you may be surprised. I skimmed some comments on some of the most circulated articles about the news and was a bit disheartened by some of what I saw. Obviously, I could talk about Appalachia’s bloody fights for labor, coal miners, cotton mills, lumbering, and the like, but that’s a history lesson that most should be familiar with but obviously aren't.
If folks like my dad, a former long-time employee of NC’s furniture industry, had had Union protection, I’d have better teeth, we’d have had less worries about foreclosures, and he’d have more to show for his years of labor and dedication. So for the sake of those future children, I welcome any union expansion.
For those upset, threatening to boycott the business, I have some questions. Why are you, as someone in Watauga County or Boone, more for the corporate elites who have never been to Boone and who likely never heard of it, than for workers in our community? Why do you think paying or treating employees fairly will increase prices any more than the rampant profit-centered nature of Starbucks? Do you think that, even when coffee costs $8, Howard Schultz and Co. are barely scraping by?

I’m honestly at a loss and frankly a bit disappointed. Being angry at the workers in your community that are advocating for fairness just ain’t Appalachian. While I do understand the sentiment of supporting local, and try to do so myself, if the final straw between you and Starbucks is a union, you have some reflecting to do.

On a positive note, the organizers of Starbucks United Boone credited their success in unionization to community support and the dedication of their partners. I think we should all reexamine our attitudes toward the service workers that have put up with so much for the past couple of years and support them in their fights for better treatment. As for me, I’ll do whatever I can to support them in my personal capacity.

Posted by J.W. Williamson at 5/02/2022 07:17:00 AM
Email ThisBlogThis!Share to TwitterShare to FacebookShare to Pinterest
Labels: Town of Boone, union activity

I agree people in this are seem to be very under educated. Unions have this dark taboo around them but why? Because our old capitalist grandparents fell into believing they were, and now we should too because that’s what they say or feel. Workers rights is a great step towards what Boone needs, we already face one of the largest housing crises. Yet no one complains about slumlords like the owners of BHR, the standard, WVI and others. Grow up already! Stop thinking putting people down and boycotting being a respectful human is normal and okay. A majority of workers in this town are college students who without them Boone would be a Barron wasteland of nothing.

Well-said and timely. The past exhibit io the Jones House by the County Digital Project had an insightful statement about valuing workers in our community and our responsibility toward them. The tension between corporate management and labor is part of the capitalistic economic system we live in, and unions are a practical structure to represent workers.