'Year of the Woman' Just Got More Interesting 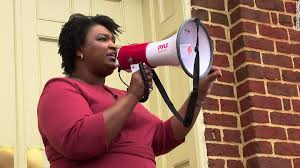 Georgia
Stacey Abrams is the Democratic candidate for governor of Georgia following yesterday's primary. That's just short of astounding for the Peach State, and for any other state in or out of the traditional South, because she won her primary over a white woman with over 70% of the vote.

Abrams is 44 years old, a graduate of Yale Law School, and a leader of the minority Democrats in the Georgia legislature. She's also the successful writer of novels, which she produces under the non de plume Selena Montgomery. (Who's the last Georgia politician who also wrote novels? Yes, you're right: Newt Gingrich.)

“We are writing the next chapter of Georgia’s history, where no one is unseen, no one is unheard and no one is uninspired,” she said at her victory party last night in Atlanta. And she quoted the book of Esther: “We were born for such a time as this.”

Kentucky
Amy McGrath, the first Marine woman to fly an F-18 fighter jet and a candidate I've been very excited about, upset the odds and beat the DCCC's pick in Kentucky's 6th Congressional District. Lexington's two-term mayor Jim Gray had been the anointed-by-Washington candidate to take the district, and he was soundly defeated. McGrath goes on now to face a weak Republican incumbent, and she's already leading him in the polls.