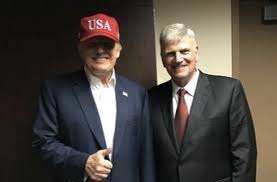 In case you missed it -- as did I -- here's your chance to read Isaac J. Bailey (member of the Charlotte Observer Editorial Board), assessing the Christian witness of Franklin Graham (hattip JF):

Donald Trump said he could shoot someone on Fifth Avenue and not lose any support. It was, and remains, the most insulting thing anyone has said about Trump voters because it means they have no principles, no core. It didn't bother them that he said that about them.

I didn’t know then that Trump was referring to the Rev. Franklin Graham, who has become a parody of himself. I should have known, given that Graham decided to side with the man who wanted American missionaries who contracted Ebola in 2014 to be left to die in Liberia.

“The U.S. cannot allow EBOLA infected people back,” Trump tweeted. “People that go to far away places to help out are great — but must suffer the consequences!”

One of those missionaries was Kent Brantly, who said he had felt called by God to travel to West Africa. He went on behalf of Graham’s non-profit, Samaritan’s Purse. Fortunately, the Obama administration ignored Trump and brought Brantly home, saving his life.

Not even that level of callousness gave Graham pause about Trump. Graham assesses behavior, not on right or wrong, but political affiliation. That truth slowly began revealing itself during the 2016 presidential election cycle. It continued as Graham began embracing Trump no matter how many lies the president told and was recently cemented in an interview with The Associated Press.

“I found the president to be truthful with me,” Graham said.

We “just have to give the man the benefit of the doubt,” he reasoned, despite Trump’s history of bragging about extra-marital conquests, his declaration that he needn’t repent for anything, his propensity to lie about issues consequential and not.

But all doubt was erased when Rudy Giuliani said Trump reimbursed Cohen for the money. Giuliani did that after consulting with Trump. They’ve since tried to muddy the waters with a partial reversal, but serious people should not believe them. The Wall Street Journal, New York Times and Washington Post have nailed down further confirmation of the scandal. Cohen had hundreds of thousands of dollars to use to keep such issues private and Trump knew about this for months, even as he and his press secretary repeatedly told the American public otherwise.

Still, Graham recently told the AP: “I think this thing with Stormy Daniels and so forth is nobody’s business. … I think when the country went after President Clinton, the Republicans, that was a great mistake that should never have happened.”

Graham led the charge against Clinton, declaring in the Wall Street Journal in 1998 that private conduct has public consequences.

“Clinton’s months-long extramarital sexual behavior in the Oval Office now concerns him and the rest of the world,” Graham wrote. “If he will lie to or mislead his wife and daughter, those with whom he is most intimate, what will prevent him from doing the same to the American public?”

Graham says Trump’s affair happened before he was president. He cares not at all that Trump has been proven a pathological liar since he was sworn into office, telling a list of lies and misstatements that has surpassed 3,000, according to the Washington Post fact-checker.

This isn’t about political hypocrisy; it’s that Graham is teaching his flock that nothing really matters. He’s become a moral leader who no longer believes in morality.

That he and his most ardent supporters aren’t ashamed of what they’ve become in service of Trump is most shameful of all.

My only consolation is that Franklin's God is watching and the God of MY Bible would not allow such a man into heaven.