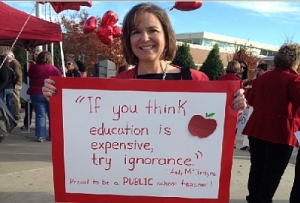 The North Carolina General Assembly reconvenes today in Raleigh, and when the House and Senate sessions open at high noon, the legislators will be met by thousands of North Carolina public school teachers protesting salaries and working conditions. The NC Association of Educators is predicting 20,000 in the streets. The Progressive Pulse guesses 15,000. At least 10,000 teachers have requested personal days, which caused at least 38 school systems to suspend classes school-wide (which is what conservatives will seize on to discredit the teachers).

Phil Berger, Tim Moore, and their boys have dribbled a little salary money over the ranks -- so little, so late. Public school teacher salaries are still 16% below national averages. As Berger/Moore gave a little, they "balanced" that actual stinginess with more punishment for teachers in other ways -- cutting support staff (teacher assistants, school nurses, counselors) and cutting supplies (so teachers have to buy their own) and forcing more kids into classrooms (because nothing says learnin' like a restless herd).

Justin Parmenter, a seventh grade language arts teacher at Waddell Language Academy in the Charlotte-Mecklenburg County school system, gathered some statistics to prove it's not about "money-grubbing" (another favorite conservative slur against teachers).

North Carolina's population has increased more than 10% since Berger/Moore/Republicans took over everything in Raleigh, and the balloon hit school class size. ("Can we get 12 more desks in here?") Berger/Moore/Republicans dealt with increased school population by cutting teacher assistants. Well over 7,000 teacher assistants lost their jobs under the new Raleigh regime. Parmenter assembled a gallery of other horrors:

It's not just teacher assistants. It's school nurses and counselors. "It’s recommended that social workers be provided at a ratio of 1:400. Our ratio is 1:1427. The suggested ratio of psychologists per student is 1:700. This year our ratio is 1:1857. Nurses should be available at a ratio of 1:750, but we are currently at 1:2315 – with many schools forced to have parent volunteers staff the nurse’s office rather than leave it empty."

Earlier this week, Berger communicated a veiled threat to teachers: “Teacher strikes are illegal in N.C.,” Berger told the state government news service. “And in some respects what we’re seeing looks like a work slowdown, and looks like a fairly typical union activity, and the people of North Carolina don’t support that sort of action.” A Republican lawmaker called organizers "thugs." But last night, Berger/Moore hastily called a press conference and announced a 6.2 percent salary increase for teachers this year, which was actually old news. The budget the Republicans passed in 2017 included the 6.2% raise for some teachers to go into effect in 2018. Governor Cooper has asked for 8%, with at least 5% guaranteed to every teacher. “Instead of prioritizing tax cuts for corporations and those earning more than $200,000, legislators should give real raises to all teachers,” said Cooper spokeswoman Noelle Talley. “Making education the top priority means more textbooks and classrooms, not more tax cuts for those already at the top.”

I don't think the teachers gathering in Raleigh today are going to be bought off so easily. And I don't think Berger knows anything but dictatorial authoritarianism, so this movement and the reaction to it will be worth watching.