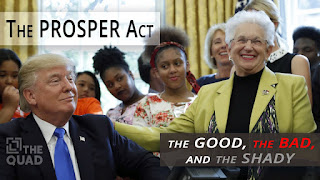 Virginia Foxx has preached for years that government shouldn't fund education, but she's bullish on the for-profit education industry funding her. Foxx was the top recipient in Congress of for-profit college industry money in 2017, raking in $45,450.

Naturally, you want to help your friends. So Foxx has authored the deceptively named PROSPER Act (for "Promoting Real Opportunity, Success, and Prosperity through Education Reform"). Ha! Foxx is now chair of the Education Committee in the House, and her current overhaul of the Higher Education Act would unleash for-profit colleges from accountability and allow them to continue to defraud students and saddle them with predatory loans to pay for an "education" that ain't one (except maybe an education in deceptive advertising). Worst of all? Foxx's law would grant for-profit corporations more access to federal aid.

(The scandals among for-profit education corporations are totally public. I believe DJT had to pay off a bunch of defrauded students in the dissolution of his for-profit Trump University. Foxx loves Trump. Likes his style.)

Foxx gained fame among young people for saying she had very little sympathy for college students with large debts. She's claimed for-profit colleges are “more efficient,” the way a slot machine is efficient. She once compared attempts to regulate the pro-profit industry to the Holocaust and said in an interview with the Chronicle of Higher Education in 2016 that the Obama administration cracked down on for-profit colleges “arbitrarily,” and that, “We don’t have evidence that [students in these institutions] were defrauded.”

She's a black frost on the civic contract that says that America's youth should be educated. Her ballooning wealth as a US congresswoman has metastasized into self-righteousness and holier-than-thou pronouncements about how poor and underprivileged she was. She did everything herself, and if you're not as rich as she is (she's in the top 60 richest members of Congress), you just didn't try hard enough, and so shut the hell up.

I personally experienced Virginia Foxx as an educator in the early 1970s when I was a new assistant professor of English at Appalachian State University and Virginia Foxx was the assistant dean of general education. Her condescension and autocratic impulses earned her many not-admirers. Plus she shit in her hat at ASU and went forward to lay waste at Mayland Community College as its president. She has an Ed.D. and insisted in Congress that she be addressed as "Doctor Foxx."

She's the kind of doctor that won't get you well.

Posted by J.W. Williamson at 5/29/2018 07:58:00 AM
Email ThisBlogThis!Share to TwitterShare to FacebookShare to Pinterest
Labels: public education, Virginia Foxx