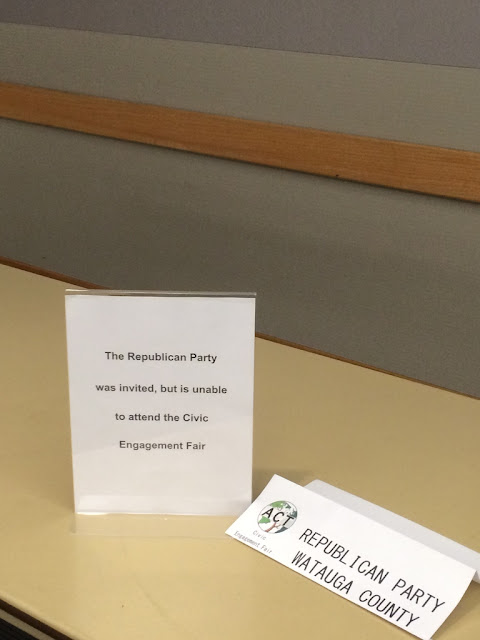 Maymead provides many jobs in this area. And personally, I have an issue with students making decisions for this town and then the homeowners are left to deal with it.

" I have an issue with students making decisions for this town and then the homeowners are left to deal with it." IMHO, homeowners should not be the only ones who make decisions, nor just landowners. That harkens back to the days when only the landed gentry dictated the rules, and renters, workers, and others not so fortunate had to live under the "decision-makers" rules. If someone lives in the county for four years, no distinction should be made between students or others. They deserve the same rights.

Which decisions have students specifically made that homeowners have had to deal with?

They'd rather suppress student vote than talk public policy with them.

I wonder how many ASU students voted to borrow the 25Million dollars for the water intake? How many of them will still be here when the money is due ot be paid back?

It's pretty clear to most election observers that it is the ASU vote that keeps the Town of Boone under Democrat management. Even the Democrat county commissioners are in place entirely because of the ASU vote. Not one single Democrat cc candidate carried a single precinct outside of the town of boone. Billy Kennedy didn't even carry his home precinct!

I'm not arguing whether or not ASU students should vote here - I am only pointing out that they control the outcome of town elections and have big influence on county elections and it is the LANDOWNERS and HOMEOWNERS who end up paying the bills.

I have an issue with Maymead making decisions for this county.

Thanks to Republican commissioners, Maymead gets to make the decisions for local homeowners and industrialize a swath of land along a scenic byway, affecting a bunch of neighborhoods in Watauga. This despite the fact that the county planner revoked an old permit for lack of progress.

How many jobs does Maymead provide? And are they filled by Watauga County residents or out of state people? Details matter.

Tourism employs a lot of people too. Turn Watauga into the high impact armpit of the High Country, and we'll see what happens...

Maymead employees almost entirely drive over from Tennessee. The only effect of another asphalt plant in Watauga County is a net LOSS of jobs because of a projected loss of tourism dollars, and those high-tech employers that choose not to startup here because of overbuilding in Boone, and a degraded environment out in the county.

Students usually don't turn out on town issues/elections. They mostly vote in Presidential years....like most voters everywhere, to be honest, even though it's the local elections that determine most issues for most of us.

"I wonder how many ASU students voted to borrow the 25Million dollars for the water intake? How many of them will still be here when the money is due ot be paid back?"

I guess you can't attach a number to this specious claim. May as well ask, "I wonder how many angels dance on the head of a pin".

If the LANDOWNERS and HOMEOWNERS are that concerned, they need to get off their ass and vote. If they can find a polling place.

If you look statistically at town election and if you had done any research the bulk of democrats live in the town. This holds true even when taking out the student population. Very few vote in the town election. If go even further look at what the margin of victory has been for the democrats. It hasn't even been close.

I wonder how the many residents of this county who rent feel about having their voting rights revoked just so we can keep the students from voting. You just excluded them by saying only homeowners can vote. Just because you rent doesn't mean you don't plan on staying here. Some people don't want the up keep of a home or don't want all that space. Oh and you just included anyone living in a assisted living center as well since many gave up their property and live there now.

If homeowners are the only people who should be allowed to vote in elections, would I have been eligible to ever vote at any point in my life? I've spent more time in Boone than anywhere else since I've become an eligible voter.