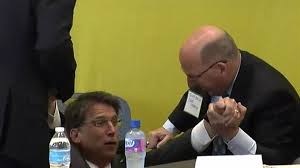 Hexavalent chromium. It's what caused cancer in all those people around Hinkley, Calif., that was the subject matter of the movie Erin Brocovich.

The indisputable presence of hexavalent chromium in well water around Duke Energy's coal ash pits is now causing The Guv's Chief of Staff to cry "LIAR" about the state of North Carolina's Chief Toxicologist, who has testified under oath in a deposition that The Guv and his boys leaned on him to soften the warning about hexavalent chromium. The toxicologist wanted to warn people: "Your water is not safe to drink." The Guv and his guys wanted more of a "Go ahead and drink your water because North Carolina Comeback!"

Duke Energy, which has been McCrory's hot lunch for decades, must not be fingered as the source of cancer. That's the gospel in the McCrory administration.

And according to the Chief Toxicologist's testimony, McCrory was leaning on him not to alarm the folks in the manner that McCrory likes to use to lean on public servants: sort of indirect, sort of vague, sort of intended to give McCrory plausible deniability. The Chief Toxicologist was ordered to a "meeting with the governor," he was told, but when he got there he was confronted only by subordinates of the governor, particularly the ones who handle public relations. Only then did the governor call in -- on the toxicologist's cell phone, no less -- and express misgivings about how a warning to the citizens might be worded, because, after all, science is wholly subject to work choice, isn't it?

How similar that scene was to the famous "I was in a side conversation" dodge adopted by McCrory after it came to light that he had participated in a meeting to pressure the Department of Public Safety into giving his pal Graeme Keith a lucrative prison maintenance contract.

McCrory knows better than to cost Duke Energy money, but he's now clearly concerned that Duke Energy is going to cost him his job as governor. They've been playing with people's lives at the governor's office, and their coverup is crumbling.

Very thorough unpacking of the history behind this scandal by Bert Gutierrez in the Winston-Salem Journal.

I am a republican and always will be. I worked hard to get McCrory elected. However, over the past 4 years I have not been happy with what I have seen. It seems that almost every time McCrory has an ethical issue, somewhere in the background the face of Duke Energy arises. That bothers me. I have nothing against Duke Energy, but a huge corporation should not have the influence over our governor that it appears to have over Mr. McCrory. As a result, as I have told several people before, I endorse Roy Cooper for governor. I have known and worked with Mr. Cooper for several years. I have found him to be an honest, straight up person who looks out for the good of the people; not the good of Duke Energy.

Wilson was a "Repbulican" when it was to his advantage to be one in order to run in a heavily conservative judicial district. When he was ready to leave the DA's office, he played a game in resigning and appointing a hand picked successor to replace him as DA. Fortunately, governer McCrory saw through this scam, cancelled Wilson's scheme, and appointed as actubg DA Bob Orr - former State Supreme Court judge and NOT A CANDIDATE FOR THE DA SLOT!

Orr did a great job. Wilson's sock puppet candidate was defeated, a new DA was elected and cleaned up most of the mess Wilson had left behind - including replacing Wilson's hand picked assistant!

Now Wilson, his devious plan exposed and stalemated by governor McCrory - is trying a little payback!

Wilson at least has shown his former GOP supporters just what kind of a "Republican he really is.

Support Cooper if you want to, Jerry. Maybe it will work out better than your support for Britt did.