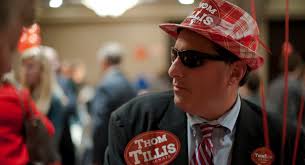 Dallas Woodhouse was a star of right-wing politics before he became Executive Director of the state Republican Party in September of 2015. He had led the NC branch of Americans for Prosperity and founded Carolina Rising in 2014, a 501(c)(4) with a single big donor, for the purpose of getting a single candidate, Thom Tillis, elected to the Senate. (His subsequent drunken TV interview at the Tillis victory celebration is a YouTube staple. Google it.)

So he's supposed to be smart? His writing of emails doesn't provoke admiration for his skills with language. (His ungrammatical rant attacking WBTV investigative reporter Nick Ochsner is but one example.)

So he's supposed to be a master political operative? The messy way he purged new NCGOP Chair Hasan Harnett, stabbing him in the chest in broad daylight, shows the deft touch of ... well, a Donald Trump acolyte.

You know the old saying is true: "Every level seeks its own water."