Eggers-ism, An Endemic Disease Among the NC GOP

Eggers-ism noun, the irresistible itch to suppress the votes of your political enemies

Or we could call it "Woodhouse-ism," though we prefer to shop local. 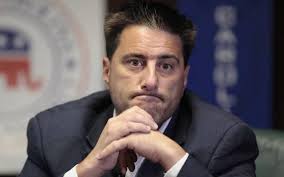 Dallas Woodhouse, executive director of the NC GOP in Raleigh, used a private email address to command urge the Republican member of the Wake County Board of Elections to appoint Woodhouse's cousin Eddie Woodhouse to the chairmanship of the Wake BOE.

That Republican member, Ellis Boyle, not only refused to do Woodhouse's bidding, but he also refused to agree to Cousin Eddie's subsequent motion to close some Early Voting sites in Wake, including the one on the NC State campus.

Ellis Boyle was also infuriated that Dallas Woodhouse would send emails regarding public business to his private email account, reprimanding Woodhouse in blunt terms: “If you would like to correspond with me in writing about board business in the future, please use my board email account.”

Woodhouse, in true Eggers-ism fashion, is wholly unrepentant and unembarrassed to be exposed in this manner.