Representative Foxx Lives Up To Her Constituents' Prejudices 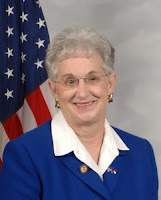 Virginia Foxx had her response all written and polished by 10 a.m. yesterday morning, so she was able to send it out to the world seconds after Justice Kennedy began to read his historic decision on gay marriage:


“Two years ago the Supreme Court insisted that marriage was a policy decision that properly belonged to the states, but today they have imposed a redefinition of marriage nationwide. This decision undermines the ability of states to set public policy within their borders as voters in North Carolina overwhelmingly did in 2012. I’m also extremely concerned about the threat this ruling poses to the conscience rights of people and organizations who believe that marriage is the union of one man and one woman. I will do everything in my power to defend these rights and protect the sacred institution of marriage.”

Knowing the representative's personal history, it makes my skin crawl uncontrollably to see her evoking "the sacred institution of marriage," not to mention her feeding her constituents the steady diet of ignorance she's known for. The Supreme Court decision yesterday did not redefine marriage. It merely made the old definition available to everyone. The only redefinition is going on in the fantastical brains of Foxx's devoted followers.

This is the woman who once upon a time checked a box on a candidate survey indicating that she was in favor of gay adoption. That was then. Her benighted Fifth District of NC needs different nourishment now.

One response to her statement on the High Country Press website deserves reprinting here:


Joseph W Dickson · Following ·  Top Commenter · Director of Kung-Fu Style Butt Whoopinsat LLoyd's Butt Whoopins and Hair Care CenterOK Rep. Foxx... we get it. You don't believe that the inalienable rights as defined in the U.S. Constitution should apply to everyone. You believe that the beliefs and rights of some should trump the rights of others. As you're an educated woman, I'll assume you're aware of world history. You should know then, that throughout world history, many rulers and countries have made efforts to carve out subsections of the general citizenry they find displeasing. These leaders and countries have then relegated these people to a status where they have fewer rights than those able to access all available rights and liberties. You will not find a single instance of this where the result has not been later seen as a willful violation of human rights. Often it has ended in horrific oppression, suffering, and genocide. Yet, as a representative of the people, elected to fight for that which will bring your constituents freedom, liberty, and prosperity, you advocate for the same oppression history has shown to be so destructive. You argue on behalf of those who would use their beliefs to relegate others to a position unequal to your own. In essence, you do not represent all of your constituents... you only represent those with whom you find yourself in agreement. You publicly advocate to strip some of your very own constituents of those rights and liberties you are sworn to defend and uphold. One day, far in the future, history may well count you alongside other leaders who sought to oppress some for the pleasure of others.

Posted by J.W. Williamson at 6/27/2015 07:37:00 AM
Email ThisBlogThis!Share to TwitterShare to FacebookShare to Pinterest
Labels: gay marriage, Virginia Foxx

The beauty of the Supreme Court decision is that you may go on believing whatever you want to believe and doing whatever you want to do. The only thing that has changed is now The State -- government -- cannot legally deny equal marriage rights to all its citizens. You're fine, your religion is intact, you're perfectly free to believe in any system of redemption and retribution that strokes your ego.

No, Mr, Williamson, the federal government is all powerful; its complete control is now finalized. There is no beauty in raw, ruthless power. The original Constitution, the Bill of Rights are dead. We are totally under a centralized, oppressive federal government; a brutal murdering machine. The individual states, the individuals, have nothing; the federal government can kill, steal, dictate without any restraints now, whether under the color of 'law' or de facto, even in the land our fathers conquered. No, Mr. Williamson: The Christians, the traditionalists, are in danger now. We Christians have been in danger for quite some time now, only more so in recent years. You speak of ego; no, I think of the soul, the spiritual, an uplifting culture. Your revolution, your cultural Marxist movement is complete now. One question: Do you really believe the sexes are fungible?

Your fantasies of persecution are so over the top that I'm inclined to recommend you seek psychiatric treatment. There are effective drugs, I hear, for delusions like these. For me to accept the assumptions you're working with would be to deny all the reality I recognize.

I love how Republicans repudiate their own (Kennedy - and Roberts on healthcare) if they ever show tolerance or if they break from the strict pro-gun, pro-corporatist, anti-environment, etc. doctrines of what is less a political party and more a cult these days.

Wow, Anonymous 11:16 (although I think we all know who you really are) that was some screed! The federal government murders people? Can you point to even one instance when Christians in this country have been persecuted by the federal government? You can still believe whatever you want to believe - no one is telling you that you can't worship in whatever way you desire. You can still pray whenever you want. You can still cover your car with crosses and fish. You just CAN'T force your views onto other people. It doesn't affect you one bit if two men or two women want to get married. Your life will go on as it is now, as paranoid and delusional as it seems. Oh, and by the way, you sure do show the love of Christ in the language that you use!

You are forcing your standards, your beliefs, your lifestyles, on the rest of the population with the force of de facto federal government decrees. But that's OK now, isn't it? You say now that we cannot even have bumper stickers ? Is that your interpretation of force ? What of your own bumper stickers, etc. ?

Mr. Williamson: Your condescending statements and suggestions are typical. You are now being the intolerant one, suggesting that dissidents seek 'medical help', mind-altering drugs, to adjust to your New Order. Drugs are dangerous as anyone with common sense knows. And yet, you suggest them. Persecution of Christians, their beliefs, their businesses, are now in force. I ask you: How will you deal with the dissidents who will rise against your Order ?

I'm not forcing my standards or beliefs on anyone. You can hate gay marriage all you want. You can preach against it. You can plaster your car with anti-gay bumper stickers or put signs in your yard. You are free to do any or all of that on your own property. What you are not free to do is to codify in LAW your beliefs against gay people. Why is that so hard to understand? JW isn't being intolerant, since he isn't trying to pass laws against Christians. Live your own life and stop trying to butt in to other people's lives.