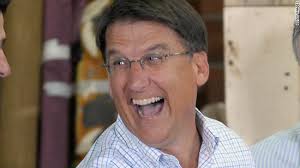 Poor Gov. Squishy! He watched how popular South Carolina Governor Nikki Haley seemed to become when she stood before banks of microphones and recommended that the Confederate battle flag come down on the state capitol grounds.

I know how to make myself popular! Gov. Squishy said to no one in particular.

So he sent out his spokesman Josh Ellis to say that the governor was asking the General Assembly to pass a law outlawing the Confederate symbol from specialty license plates. A swing and a miss.

Turns out the governor doesn't need the General Assembly to pass a law, and why didn't he know that? Since the Division of Motor Vehicles decides what goes on specialty license plates, and since the DMV is under the executive branch of North Carolina government, the Guv can simply order the plates discontinued.

That's what Republican Senate leader Phil Berger immediately said: the issue "is one that can be addressed by the executive branch." Period.

So instead of taking the action which McCrory demonstrably could have taken on his on, the Guv decides to grandstand, copying Nikki Haley, in hopes of winning admirers and naturally votes. But what he's mainly gaining is more public humiliation for how dumb he looks, and you should read the public comments on the web site linked above.

Posted by J.W. Williamson at 6/24/2015 08:59:00 AM
Email ThisBlogThis!Share to TwitterShare to FacebookShare to Pinterest
Labels: Pat McCrory, Phil Berger, racism