Huckabee Visits Hendersonville, Fails To Call Down Fire From Heaven on Asheville 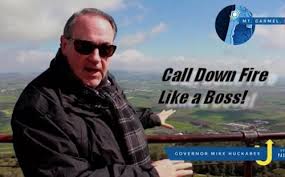 Did you know that full-time Southern Baptist preacher and part-time presidential candidate Mike Huckabee was in Hendersonville yesterday? He was the guest of Congressman Mark Meadows (NC-11), a Republican member of Congress who's generally credited with the government shutdown last year and a man so right-wing that even Virginia Foxx draws her skirts a little tighter around her when in his presence.

Several hundred people crowded in and around Harry's Kitchen in Hendersonville to hear and be near Mr. Huckabee. He talks like what he is, an accomplished preacher with a sharp wit who believes he's sent by God to use that razor against the sinful.

Huckabee is possibly the most vociferous opponent of the Supreme Court currently running under the Republican banner for president (though he has several strong runners-up for that title), and he's very much into the "Christians are persecuted" Kool-Aid.

From the Asheville Citizen-Times coverage: "Asked what he would say to the large gay-friendly population of Asheville who believe the court's decision affirms equal protection under the Constitution, Huckabee said they should have joined forces to change the law through the legislative process."

Riiight. That's often happened in our history, hasn't it? A despised minority manages to get a legislature like North Carolina's to change the laws to give them equal rights?

Meanwhile, outside the precincts of Fantasyland, a cookie still crumbled in the normal way.