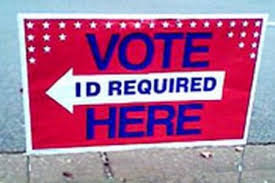 Yesterday, and completely out of the blue, the NC Senate, followed quickly by the NC House, voted overwhelmingly to soften the photo ID law.

Assuming that Gov. Squishy will sign this new wrinkle into law, it will set up "a process for voters to use a 'reasonable impediment declaration' outlining why they couldn’t provide a photo ID at the polls. Voters could claim one of eight reasons, including a lack of transportation, disability or illness, lost or stolen photo ID, or a lack of a birth certificate or other documents to obtain a photo ID."

The Rev. William J. Barber II, the head of the state NAACP who was arrested on Wednesday while protesting the N.C. voting laws at the N.C. General Assembly, wasn't impressed by this sudden weakening of what had been the most draconian photo ID law in the nation: “These legislators try to distract us from the full bill implications by minimally fixing a leaky faucet but keeping the whole foundations of the bill intact. The pressure of protest and legal action are exposing their actions and forcing them to adjust. If they were truly interested in change and the tenets of our democracy, they would repeal the entire bill....”

Meanwhile, the grandees at Art Pope's Civitas Institute, who had pushed hard for photo ID, were forecasting the end of Western Civilization. Susan Myrick, elections policy analyst for Civitas Institute, said that she was caught off guard by the Senate vote. “To say the least, we were surprised,” Myrick said. The provisional ballot addition, she said, “guts” the ID rule. “It demolishes it,” Myrick said. “There’s no voter ID in North Carolina. It’s over.”

Well, we could hope, but Myrick's hysteria is no more impressive than the small change to the law that they voted on yesterday. 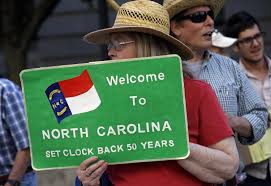 But why this sudden reversal? Astute observers are pointing out that this sudden move comes just two weeks before a federal trial over the constitutionality of the entire new voter laws will begin in a Winston-Salem courtroom. Changing the rules on the eve of trial seems just a little ... too ... transparent. Especially as Republican bosses in the General Assembly -- not to mention their "amen corner" out in the wilds -- have contended for years now that stringent photo ID laws were necessary to squelch widespread and prevalent voter fraud.

“One of the things we’ve been doing over the past two years is getting feedback,” Senate leader Phil Berger, the hardliner's hardliner said. “So what that provision represents is some of the feedback to try to make sure everyone who is eligible to vote has the opportunity to vote and have their vote count.”

Wow, commented someone. "Republicans have ears?"