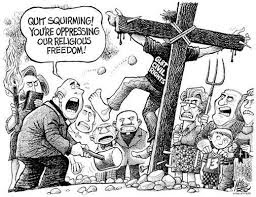 With conservatives taking a deep-dive into paranoia over the Supreme Court decision regarding gay marriage, we stand amazed at the right-wing willingness to drink the Kool-Aid of "persecution."

That word, not to mention the entire mental gymnastics required to use it, is being thrown around like confetti at a … well, at a gay wedding. That sort of exaggeration cheapens the word. It also does spiritual violence to real religious persecution, which this world has witnessed and still witnesses, but not because some store clerk says "Happy Holidays" instead of "Merry Christmas."

Because we don't bow our heads and confess that your religion is superior to ours doesn't mean that we have oppressed you. We are preached at continuously -- lectured and hectored and warned of hell fire -- by men and women whose superior morality and access to megaphones displays privilege rather than persecution, and it is our privilege to ignore Franklin Graham and turn away to more fruitful voices.

Didn't a Republican presidential candidate recently threaten to call down fire from heaven if the Supreme Court didn't straighten up and fly right? It is my privilege to laugh at him. Is that the "persecution" you're speaking of, O my brethren?

2. Unlike non-profit orgs, religious groups receive their tax exemption without having to ask for it. They get tax exemption by merely existing. "Houses of worship" are given exemption as soon as they open their doors.

3. Houses of worship are free from the mandatory reporting obligations that are imposed on secular nonprofit groups.

4. There is no way of knowing how much money a particular church raises, nor the value of its many assets, because they are not required to tell anyone (unlike a secular nonprofit). Mega-church pastors can own closets full of thousand-dollar suits, drive expensive cars, and even own their own jets without much worry that anyone "official" will ever check on his finances.

5. This is so because Congress passed a special law governing church audits that requires the IRS to show "heightened scrutiny" before initiating such procedures. Church audits must be approved by highly placed IRS officials. When's the last time you heard of a mega-church being targeted for an audit? Was it persecution? Or was it a response to conspicuous consumption?

6. The ability of religious groups to proselytize and spread their theology is limited only by the imaginations of their leaders. They own television and radio stations (tax exempt, by the way). They own publishing arms. They get a regular seat on Fox News and other cable outlets for "balance" (but really because they're entertaining).

7. Religious groups own hospitals, secondary schools, colleges, social-service agencies, and other entities. Many of these are subsidized directly with tax funds. In recent years, religious groups that sponsor charitable services get taxpayer assistance through the "faith-based initiative."

8. A house of worship or a ministry can fire employees at will if those workers violate (or are merely suspected or accused of violating) some tenet of the faith. A religious school, for example, could fire a woman who becomes pregnant out of wedlock. Most American government entities -- really, all of them -- do not allow such retaliation.

9. Most American political candidates and office-holders -- of both major political parties -- are quick to declare their Christian faith and announce their attendance at a Christian church, because not to do so would invite suspicion and rejection.

Get off your "persecution" high-horse. It all suggests that you really have no true faith at all.
Posted by J.W. Williamson at 6/29/2015 09:18:00 AM
Email ThisBlogThis!Share to TwitterShare to FacebookShare to Pinterest
Labels: gay marriage, religion and politics

Did you see this? "Welcome to the new world. It's just changed for you Christians. You are going to be persecuted according to the U.S Supreme Court dissents," said Alabama Supreme Court Chief Justice Roy Moore. The man who shouldn't sit on any judicial bench anywhere, except maybe Taliban-occupied Afghanistan.

No church will be forced to marry people they don't want to. My church will continue to hold weddings for members and their families, gay or straight, and require extra steps for folks who've been divorced. My church won't be forced to start holding weddings for couples who just walk in off the street and say "how pretty! We want to stage our colossal wedding extravaganza here!", and other churches won't be forced to marry gay couples.

Why don't we start a campaign to remove the tax exempt status and other special privileges for churches that do not accept the Supreme Court's decision?