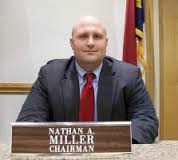 There's an old saying -- "A man who is his own lawyer has a fool for a client." I believe I witnessed the truth of that at a hearing in Watauga civil court this morning when former Watauga County Commission Chair (and practicing attorney) Nathan Miller represented himself in defending a motion by Kathleen Campbell for summary dismissal of the suit that Miller brought against her last year for the production of public records.

The lawyers for Kathleen Campbell argued for the dismissal of Miller's original lawsuit on the grounds that Miller had not sued the right person -- the "custodian" of the public records -- who was Director of the Watauga Board of Elections, Jane Ann Hodges. Plus, they argued, because Miller's lawsuit was essentially "frivolous" and in the nature of political payback, they're planning to make their own case for the recovery of attorney's fees from Miller.

Miller replied that if his lawsuit was frivolous, then why did Kathleen Campbell produce the email records he was seeking? The judge, who is from Stokes County and totally unfamiliar with Watauga politics, suggested an answer to that question from the bench: "Perhaps, Mr. Miller, because you know where she lives."

Whoa. The judge was evidently reading Miller quite correctly, seeing the bully beneath the sharkskin suit.

When Miller rambled off into a disjointed narrative about the contentiousness of recent Board of Elections meetings and decisions, the judge listened patiently for a while and then asked pointedly, "What are you talking about?" I believe the Stokes County judge was beginning to get a pretty good glimpse into the politics of Watauga County and did not particularly want to go there.

Miller at one point appeared to be arguing the other side altogether. He admitted to the judge that there is absolutely no precedent whatsoever in North Carolina for a lawyer representing himself getting attorney's fees for that representation. He even produced a U.S. Supreme Court case that ruled against such a fee award.

The judge from Stokes will rule later this week on the motion for summary dismissal of Miller's lawsuit against Campbell and presumably on Miller's motion that Campbell should pay him for the privilege of being sued.

And I believe we have a new benchmark for hubris in the political history of Watauga.