New Leadership for the NC GOP 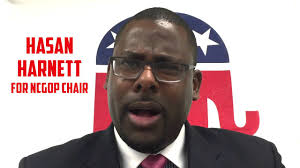 Nope, said 700 delegates at the state GOP convention, decisively beating the 562 delegates who followed the establishment in voting for Collins. Make no mistake: this was a palace coup, and a fairly bloody one, according to Tea Party commentator Brant Clifton. And, also according to Clifton, moves are already underway to undermine and neuter Mr. Harnett by the GOP establishment.

The N&O describes Harnett as "a businessman and author from Concord." He previously served as campaign manager for GOP congressional candidate Vince Coakley, who lost his race for Congress against Alma Adams last year.

As Mr. Clifton has noted, this upset election of a far-right political novice to lead the NC GOP is a major set-back for Gov. McCrory, who is busily trying to reclaim the middle ground in the state, and it's a major set-back for the handful of political allies McCrory may have in the General Assembly, who may also be tacking back to the center.

Harnett and his Tea Party choir may make it much harder to tack back center-ward.
Posted by J.W. Williamson at 6/07/2015 08:39:00 AM
Email ThisBlogThis!Share to TwitterShare to FacebookShare to Pinterest
Labels: Brant Clifton, Hasan Harnett, North Carolina Republican Party, Pat McCrory

Brant Clifton is a moron... Use a source that speaks truth not rhetoric.