Who Is This Man Laughing At? 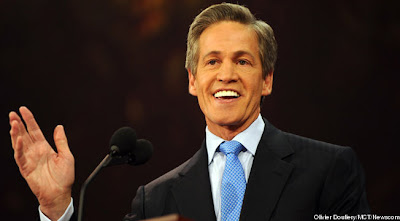 That's former Republican Minnesota Senator Norm Coleman, "a top Romney surrogate," laughing at gullible "right-to-lifers" who seem to think that Mitt Romney is on their side RE abortion. Coleman told a crowd of Jewish voters in Ohio yesterday:

Sen. Coleman made that comment in response to a question “regarding what he would say to voters who are worried about the influence of religious conservatives on the Republican Party.” Well, they should worry.

Romney is previously on record this way (not that being "on record" is anything binding for this particular slippery eel):


“My view is that the Supreme Court should reverse Roe v. Wade and send back to the states the responsibility for deciding whether it is legal or not.”


But ... never mind! Romney needs to win Ohio, and as we all know by now, he'll do or say -- or have his surrogates say -- anything to accomplish that goal.

Though ... get ready for the inevitable whiplash of the Romney campaign disavowing Sen. Coleman's comment. So believe what's most convenient about this curious etch-a-sketch Republican presidential candidate, and I'm sure he'll break his neck to please you.

Posted by J.W. Williamson at 10/30/2012 08:47:00 AM
Email ThisBlogThis!Share to TwitterShare to FacebookShare to Pinterest
Labels: abortion rights, Mitt Romney

His name is Norm COLEMAN. Not Cohen.

His name is Norm COLEMAN. Not Cohen.

The last I saw, Romney was leading in Ohio.

Look again, Annony...polls show Obama up by 5 points in Ohio.