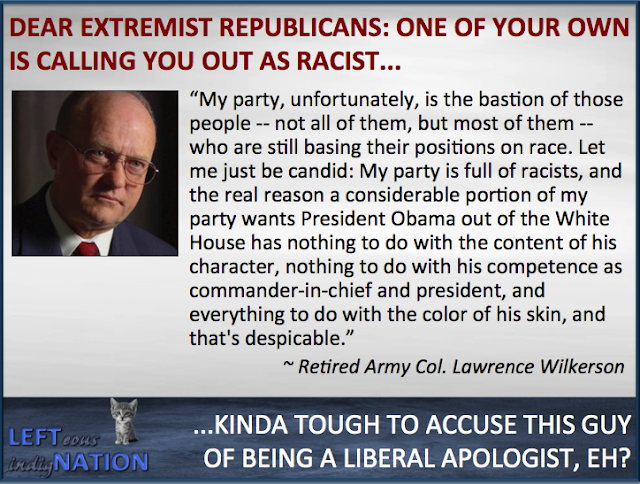 Posted by J.W. Williamson at 10/28/2012 11:00:00 AM
Email ThisBlogThis!Share to TwitterShare to FacebookShare to Pinterest
Labels: racism, Republican brand

No, it's not hard at all because he is a liberal apologist.

Did you see the results of this recent poll?

Here's just a bit of the report:

"Overall, the survey found that by virtue of racial prejudice, Obama could lose 5 percentage points off his share of the popular vote in his Nov. 6 contest against Republican challenger Mitt Romney. But Obama also stands to benefit from a 3 percentage point gain due to pro-black sentiment, researchers said. Overall, that means an estimated net loss of 2 percentage points due to anti-black attitudes.

1. We are not living in a post-racial world and prejudice is alive and well

2. A lot more Republicans than Democrats are outwardly prejudiced against blacks, and as a group they are also somewhat more susceptible to unconscious prejudice.

3. If Obama were white there would be little question of his reelection (2% makes a big difference when the election is this close).

This man does not represent any rational views of the Republican Party and if he calls himself a Republican it is in name only. Since Obama has no record to run on except high deficets, 23 million looking for work, lying about what took place in Benghazi, etc. then the race factor is now being used as an excuse. A poor excuse also. Someone who is referenced by the DailyKos, Huffing and other lib websites is certainly not a true Republican especially since he has worked for Powell who has endorsed Obama again. What a bunch of race pimps and a s bad as Sharpton.

Geeze, I knew a Democrat once that was an out and out racist. I guess I should post that here as an example of how all democrats are?

His name was Senator Byrd.

Did you know him or did you know of him? I would be ashamed to admit I knew Byrd.

Lt. Col. Wilkerson's comments reflect those of a man who understands the corner his fractured party has found itself in. His comments remind me of those of Ike, firing a warning beacon out for those in his party who've not altogether abandoned (or struggle to understand) the importance of critical thinking.

The GOP today comes across to many as a pack of wild dogs feeding on carrion, only to attack one another when the easy meal is gone.

The Red Party has begun to consume itself and its ideals from within. The divide and conquer strategy they've employed to gain power and wealth is now in play within its own ranks.