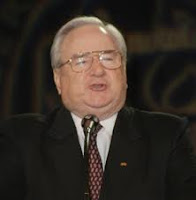 Blessed are the flip-flops, for they shall loosen the dress code.


Falwell's son, Jerry Falwell Jr., succeeded his father as the university's chancellor. He noted in the same interview that as a result of the senior Falwell's mobilization of conservative Christian voters, now "every politician has to include this voting bloc" in campaign strategies.

The author might have gone even further. Jerry Falwell Sr. really single-handedly oversaw the cooptation of American evangelical religion by the millionaire-driven corporate subversion of American democracy. The fat cats never had it so good until religion became a wholly owned subsidiary of the Republican Party.

Posted by J.W. Williamson at 10/11/2012 01:12:00 PM
Email ThisBlogThis!Share to TwitterShare to FacebookShare to Pinterest
Labels: Liberty University, religion and politics