What Kind of Teacher Is She? 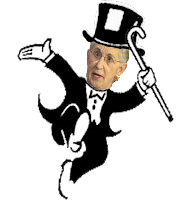 Foxx made a bizarre remark last week about American students, saying she has “very little tolerance” for young people saddled with student debt, which now tops $1 trillion in America.

It’s because she’s making big bucks from for-profit college corporations. The organization found that in just the last year, Foxx has raked in nearly $50,000 dollars from the for-profit college industry, which encourages students to take out larger loans to meet higher tuition costs.

The Department of Education found that one out of every six students at for-profit schools eventually is forced to default on his or her student loans. And while President Obama is urging Congress today to not let interest rates on federal students go up, he’s facing a headwind from Republicans like Virginia Foxx who are bought off by profiteers running for-profit schools.

She's a pretty good teacher. She taught us that 2 out of 3 voters in her district thought enough of her to vote for her in the last election!

Of course, some of you just don't want to learn!

Why? Why would someone like Ms Foxx or Mr Soucek get into politics to screw the very people that need their help most? Greedy? Connection with the rich and powerful?

Foxx has claimed that she paid her way through college, presumably by working.

It would be interesting to see the cost of her degrees then vs. now, and compare that to median incomes of "working" college students then and now.

She then went to a school approapriately supported by the taxpayers, and now her career is focused on cutting services to them, and pushing the cost of more programs onto the states.. which have little choice but to cut their budgets.

She then was able to find gainful employment while in school, and now she refuses to support stimulus to the economy so people can find work.

Ms. Foxx has more than doubled her wealth since going to Washington, and now she redoubles her efforts to cut taxes even more for herself.

The 5th District needs to send her home.

Do you want to compare the costs of everything else too?

I see others had the same idea:

Why would we want to send Virginia Foxx home? The very fact that JW and the rest of the uninformed bloggers belittle her is PROOF she is doing GREAT JOB.

For whom is the question. Certainly not for her constituents.

"For whom is the question. Certainly not for her constituents.

I guess that is why she wins by a three to one margin.