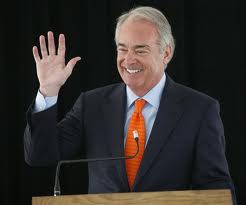 Not exactly a Democratic crowd that Duke CEO Jim Rogers was talking to yesterday at the Carmel Country Club in Charlotte, where 300 business executives had gathered for lunch.

For those of you who didn't know Jim Crow, the Charlotte Observer provides a helpful summary: "Jim Crow laws were those passed in the South between 1876 and 1965 that mandated racial segregation in all public facilities, which had the effect of turning African Americans into second-class citizens."

Deborah Greene, Dan Soucek, Jonathan Jordan, and the rest of that cohort don't want to admit that simple fact, that what they're calling the "Save Marriage Amendment" would in fact enshrine second-class citizenship in our state's Constitution and would do absolutely nothing to save their marriages or anybody else's.

What will the treatment of women by the Executive Director of the North Carolina Democrat Party do for women!!! Come on JW take on your own party and clean it up!

Right. It's all my fault. Feel better now?

Fighting for your life, huh Jerry?

Using anecdotal examples of personal misbehavior is just a lame straw man in this debate.

The issue is whether or not to enshrine systematic discrimination against an entire class in the State Constitution.

What class of citizens would be next?

It would be terrible precedent if the Amendment passes.

Having just heard about this stuff at the state office this morning I can say, without any hesitation, that the Democrats in Watauga County will be among the leaders at throwing the Exec. Dir. and the horse he road in on OUT!!

What's a crime is the fact Greene is using this hateful amendment to gain political capital to win an election. If she's a teacher, then I'm Chuck Norris.

I don't think she is "using" this issue for anything. I think she is 100% convinced that she is right - probably the same way most people on either side seem to think of themselves as being "right". If you read the remarks from both sides, they are equally adamant about their position.

She may not be a good candidate for school board, I won't argue that. But to say she is "using" this issue is ridiculous.

" I think she is 100% convinced that she is right - probably the same way most people on either side seem to think of themselves as being "right". If you read the remarks from both sides, they are equally adamant about their position."

The big difference between the two sides is if the religous zealots win real people are harmed and their civil rights, liberty and freedom suffer, If the pro freedom side wins nothing bad happens to anyone.

Answer this question what the heck does Amendment 1 have to do with the Board of Education? Not a thing!!!

Use your head Anon....the same bigots that will vote for this amendment will also vote for the board of education. They will notice this unnecessary amendment's leader and vote for her. Can you understand now why she will use this for her political gain?

You are right, Anonymous. The Board of Education does not have anything to do with Amendment 1.

Ms Greene certainly has the right to her opinion on any issue whether it has anything to do with the Board of Education or not, just like you do.

Absolutely anon. They have nothing to do with one another. You are the one trying to connect them.

She has advocated for her positions on many items over the years. Most of which had nothing to do with the board of education. Why then, would you think that she is "using" this amendment to win an election?

Are you of the opinion that since she is running for the BOE that she should not voice her opinion on other matters?

Anybody that knows her at all knows better than that. I am sure even the most ardent liberals who know her will agree that she is sincere in her beliefs.

Are you of the opinion that since she is running for the BOE that she should not voice her opinion on other matters?

Of course she should - and does. This is what distresses liberals that want status quot candidates who agree with them 100%.