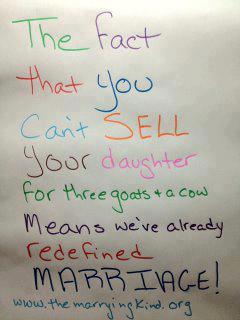 Posted by J.W. Williamson at 3/31/2012 09:40:00 AM
Email ThisBlogThis!Share to TwitterShare to FacebookShare to Pinterest
Labels: Deborah Greene, gay marriage, homophobia

The fact that the state is involved makes marriage a social contract between the parties and the state. You can have as many church services as you want (or none), but you still need a state-issued license and must comply with some state rules (age and, in some states, sex). You can't end a marriage without state involvement. I suggest that marriage be changed to a 15-year renewable contract, with the termination clause/liquidated damages clause negotiated in advance.

I propose that the state get out of the marriage business and leave that to the churches. Each church would then decide which couples they agree to marry and which not. (Some will recognize gay couples, others won't.)

The state, for the protection of inheritance, child custody, and other legal matters, including provision for any minor children, should only be involved in Civil Unions.

Anyone wishing a legal union goes through the state. If you are also religious, have a wedding, too.... Just as they have had in Europe for decades.

Opine: so who would make those decisions (" inheritance, child custody, and other legal matters") in "church" weddings. I hope that you are not suggesting that the church do that. First, I guarantee that they do NOT want to do that. Second, I know they are not qualified.

Legal affairs should be covered by civil unions. The current state of marriage in the U.S. is a grafting of state civil union onto a sacramental covenant. I simply propose separating the two so that ministers do not act as an agent of the state. Couples wishing to have state-overseen privileges - joint taxes, children, inheritance rights, medical decision-making, etc. (all those things which marriage now confers) would have a state-issued license (as they do now) and have it filed with the Magistrate.

Those who also want a church wedding, with a blessing of their civil union in a sacramental covenant, would celebrate that covenant with their minister, priest, or rabbi, and as many guests as they can afford to feed.

I believe the concept would be the same as today: The church marries, but the civil union paperwork would have to be filed with the state who would, in turn, handle these matters. This does not have to be complicated. Today, the church marries and files marriage paperwork with the State, who handles these situations. Seems like a no brainer?

In the eyes of the state of NC, marriage is already a Civil Union. There is absolutely no religious requirement for getting married. You can get married in an office or in Duke Chapel, and it's the same in the eyes of the law. One of these days we are going to look back and wonder what all the fuss was about!

Betty, Opine and Happy, I think that was my point.

Opine, just to make one clarification: in those states that have them, a "Civil Union" is a legally recognized relationship between two people of the same sex. You might want to consider that when you use the term to advance your ideas. For someone living in one of those states, your suggestion of a "Civil Union" has a whole different meaning.

My point is, there is no need to get the state out of the marriage business. If we extend marriage equality to all, problem solved. No matter what the Bible beaters would like us to believe, marriage is a civil institution in the eyes of NC and the United States. What people choose to do in terms of religious ceremonies is their own business, and they can do what they want. Churches are already free to not recognize any marriage for whatever reason. Marriage is a legal status, not a religious one.

Hello! This is kind of off topic but I need some help from an established blog.
Is it tough to set up your own blog? I'm not very techincal but I can
figure things out pretty fast. I'm thinking about setting up my own but
I'm not sure where to begin. Do you have any points
or suggestions? Many thanks

Feel free to surf to my webpage; social bookmark - fiverr.Com
-