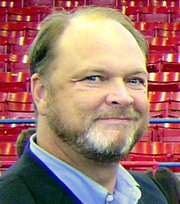 Meet Forsyth County Board of Education member Buddy Collins. Model public servant, Republican style. When Winston-Salem Journal reporter Travis Fain asked him last Tuesday at a school board meeting for comment on his proposed changes to the board's policy on whether students can opt out of saying the Pledge of Allegiance, Collins told Fain he does not comment to the Journal, "and when Fain asked why, he repeated that he doesn't talk to the Journal and left the room. Fain said to himself, but within hearing distance of several board members and staff, 'Why are you such a dick? How's that for a question?' "

Collins got the attorney for the school board involved, who wrote a threatening letter to Fain saying that using the word dick to describe a dickish member violated the board's "civility" policy by using a vulgar term to accurately characterize an elected Republican.

Fain has apologized to Collins, to other school board members, and to school board staff for (actually) seeing Mr. Collins as in himself he really is.

Meanwhile, Mr. Collins (who was really saying to reporter Fain last Tuesday, "I'm unaccountable, and you can't make me be accountable"), is strutting on his Facebook page for all his Tea Party peeps about how he put the Winston-Salem Journal in its place.