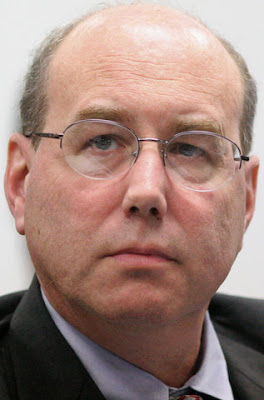 Art Pope and his ilk now own government at all levels.
Art Pope certainly owns North Carolina. The long-anticipated Jane Mayer profile of Pope, and of the 2010 theft of the NC General Assembly, is finally out in the New Yorker and makes for truly depressing reading.
Not that those of us paying attention here in-state didn't already know most of the details.
Art Pope, the Koch brothers (and there's new news about them too!), and the rest of the wealthiest 1% are shoving their version of greed onto the rest of us 99%. Only a general uprising of The People can turn the tide, and perhaps that's happening now ... in a wave that will end up making the Tea Party nothing but a curious footnote about how Pope and his Peeps managed to hoodwink a small minority of people to their program.
The People are Too Big to Fail!
Posted by J.W. Williamson at 10/03/2011 09:18:00 AM
Email ThisBlogThis!Share to TwitterShare to FacebookShare to Pinterest
Labels: Art Pope, Koch Brothers; corporate power;, revolution in the U.S.

A read for every North Carolinian, thanks, JW

Jerry you are so right. The New Yorker article lays it out in great detail and shows that NC was the target of outside agitators as well as the dupes of outright lies told by the Popes. What is the street address of their corporate HQ? Interesting that a Google search turns up only a PO Box in Henderson NC. Seems like some protests in front of their noses would be called for along with what's going on in NYC. Meanwhile I remind all who value fairness and honesty in politics and who are disturbed by the power of Big Money to boycott all Super 10, Roses, and Maxway stores.

Rage Against the Machine said...

A new website has sprung up to track the spread of the movement across the country: http://www.occupytogether.org/

Only two dots on the map of North Carolina, neither of them Asheville or Boone. The movement is spreading too fast to keep up with!

Come on JW, Mark Binker of the Greensboro newspaper has pointed out about twenty lies in this story. Could you point them out as well? There is lots of journalistic dishonesty involved in this article.

A read for every North Carolinian indeed, and for every American. This is the danger of removing all barriers to private spending in political campaigns; it leads us too far down the road towards oligarchy.

These people cannot even tell you what they are protesting about. It is a movement all right. A bowel movement.

I wonder if the Tea Party has figured out yet that they were co-opted and used and reused. Probably not, since they haven't seemed to figure out yet that Medicare and Social Security are government programs.

Anyone who supports the Citizens United ruling has sold his/her vote and does not believe in a democracy. The "Occupy Wall Street" participants, unlike the Tea Party, are not being backed and financed by multi-million dollar PACS and Fox News. The ignorant Tea-partiers do not even realize they are just puppets pushing an agenda that will benefit the Koch brothers, Wall Street and Big Oil.

I have yet to see one Tea Partier who says "I am a Democrat." If this Party is composed of Republicans, Democrats, and Independents, why do they only endorse and work for Republican candidates?

The Occupy Wall Street protestors are upset that American tax payers bailed them out of a dooming financial situation and now the banks are sitting on billions of dollars, refusing to create AMerican jobs by loaning money to small businesses. Now that's just one reason everyday citizens are pissed (no pun intended on your bowel movement comment). They are frustrated that 1% of the population own 99% of the wealth partially due to having their asses bailed out and tax breaks.

I would really hesitate to compare the "intelligence" of the Tea Party protestors to the Occupy Wall Street. I saw the Tea Party signs and the costumes. I saw Republicans, Independents, Glenn Beck and Fox News,.but I don't remember seeing any Democrats.

Now if you believe that a corporation should be allowed to give millions and millions of dollars, anonymously, to fund campaigns,..yet an individual like yourself has a set limit on contributions (in the thousand dollar range) then there is no way you believe in a democracy,.it is called a plutocracy.

What do the teaparty want, besides eradication of the social safety net for everyone except themselves? Seriously, what?

Mnay Tea Party memebers have said they are Democrats. You apparently have not been paying attention.

The Tea party wants small government with less taxes, less over regulation, cutting useless programs that are used for political purposes, and many other things that would enhance the economy.

Do you believe that unions should share the same restraints you would place on corporations and their shareholders?

What does OWS want? They have been unable to say.

It's sad to read how partisan polarization keeps people from seeing how much the OWS and TP folks have in common.

We spend so much time insulting the "other side" that when they raise the same questions we do, we have to pretend they "really" mean something different, or don't even mean anything at all.

And that's just the way our government/corporate ruling class wants it--too busy sneering at each other to focus on what matters.