McCrory: Occupy America Has No Right To Public Property! 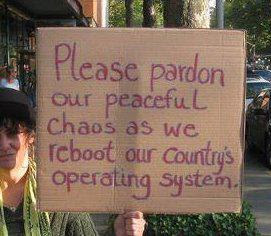 Pat McCrory, The Man Who Would Be Governor, has decided he needs to scold the city governments of Charlotte and Raleigh for "allowing" Wall Street protestors to occupy public property in those cities.
"Throw the bums out!" McCrory cries, doing his best impression of Aunt Pittypat.
Grappling for a logical reason to back up his "OhMyGawdPeopleAreRisingUp" disdain for public protest that doesn't reflect HIS views, McCrory naturally hits on "they're dirty," which is where the unimaginative always go first, and then McCrory gets a bright idea: he's really against these protests because of the danger this will mean when the Democrats come to Charlotte in 2012 for their National Convention.
Really? BWAAAA-ha-ha-ha!
[A pause while we wipe the tears of merriment from our eyes.]
Thanks, Mr. McCrory, for your touching concern for our safety, but we'll take our chances with the Great Unwashed who actually want a say in how government at every level makes its decisions.
Posted by J.W. Williamson at 10/21/2011 10:12:00 AM
Email ThisBlogThis!Share to TwitterShare to FacebookShare to Pinterest
Labels: Charlotte, Pat McCrory, Raleigh, revolution in the U.S.

So I am wondering where Mr McCrory was when the Tea Party had their event in September at Frank Liske Park in Concord, which is...wait for it...Public Property.

The more the republicans and corporate media bash or ignore this wave of change the more obvious they are the problem to the masses of those thinking of supporting OWS.

50% or more of congress and very likely Mr McCorry are not only the 1% but the greedy of the 1%, working to keep the other 99% down.