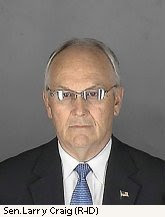 Subscriptions are slightly more prevalent in states that have enacted conservative legislation on sexuality .... In the 27 states where "defense of marriage" amendments have been adopted (making same-sex marriage, and/or civil unions unconstitutional), subscriptions to this adult entertainment are weakly more prevalent than in other states....

Those who were prone to referring to their own "red-state" areas as "the real America" back during last year's campaign will want to stake a good deal of their current reputations on the researcher's use of that adverb weakly in that last sentence. Otherwise, there's not a lot to be proud of here, O ye of the Bible Belt.

This adds evidence to our longstanding assumption that the person railing the loudest about other people's sins is very likely more guilty of that sin than the people he's pointing the finger at. And the bigots screaming about gays are themselves signaling some powerfully frightening private urges.