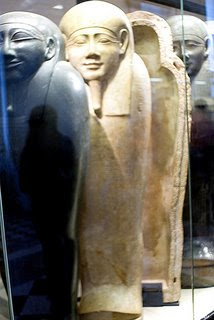 The Gallup Poll found that two-thirds of Republicans don't believe in evolution. Big surprise, that. But worse, that same Gallup poll, in June 2007, found that 49 percent of those surveyed said they believed in evolution while 48 percent said they didn't. Thanks, GOP, for the creeping moss of anti-science and stupidity.

For example, the chairman of the Texas State Board of Education, a freakin' DENTIST, thinks the earth and all its creatures are no more than 10,000 years old. This single man has it within his grasp to set back science education in all Texas public education by, oh, a hundred years. The Republican Guv of Texas, Rick Perry, would support that move.

Lousy-anna is even worse off already. Its State Board of Public Stupidity already allows "science" teachers to introduce "Intelligent Design" materials into classrooms. St. Paul said on several occasions to Christ's disciples, "I would not have you ignorant." The educational bureaucrats of Texas and Lousy-anna are apparently willing to exactly reverse that wish.
Posted by J.W. Williamson at 2/01/2009 12:55:00 PM
Email ThisBlogThis!Share to TwitterShare to FacebookShare to Pinterest
Labels: evolution, Intelligent Design