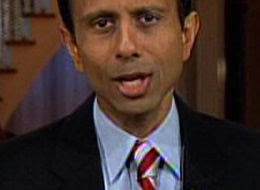 Bobby Jindal, the Great Non-White Hope of the Republican Party, decided to remind us all of the ineptness of the Bush administration during the Katrina aftermath by way of making a few points:

1. The Republican Party has lost the trust of the American people, deservedly so

2. Therefore, you should trust us

Governor Jindal had previously pasted an inadequate fig-leaf over his own hypocrisy: he said he would not accept part of the Obama stimulus money for Louisiana -- about 1 percent of it -- while taking the rest of those "irresponsible, wasteful, ridiculous" billions. We want Bobby Jindal to have the courage of his convictions. We want him to reject ALL of that irresponsible, wasteful, and ridiculous stimulus money. Otherwise, we'll conclude that he's actually the Captain Renault of the Republican Party (shocked that there's gambling going on at Rick's) rather than the voice of a reborn political party imbued with virtue and truth.

Because, see, some $175 billion of federal money has been spent in Louisiana since Katrina, which somehow, by some right-wing voodoo, is supposed to prove that the federal government is just evil.

Someone on cable TV referred to Jindal as "Governor Buzz-Kill." Someone on the blogs last night hung this title on his rebuttal of President Obama: "You're On Your Own, America."

Maybe they should have picked Sarah Palin.

FOOTNOTE
Did you see Supreme Court Associate Justice Samuel Alito greet the president in the well of the House prior to the speech? Whoa! If body language were toxic, Alito killed every furry animal on Capitol Hill last night.
Posted by J.W. Williamson at 2/25/2009 09:53:00 AM
Email ThisBlogThis!Share to TwitterShare to FacebookShare to Pinterest
Labels: Bobby Jindal, Hurricane Katrina, Obama economic stimulus, Samuel Alito, Sarah Palin