A Time-Line for the Roger Clemens Train Wreck 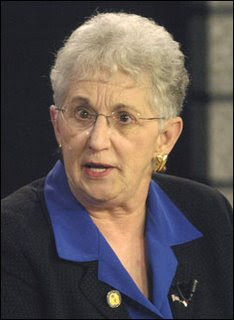 A column by sports reporter Derick Moss in The Gaston Gazette last Friday nailed the hypocrisy of House Republicans generally, and of Reps. Patrick McHenry and Virginia Foxx specifically, in the whole Roger-Clemens-on-steroids hearing controversy. (Praise be to Drama Queen for bringing Moss's article to everyone's attention.)

Moss focuses on the whole history of how this little piece of theater unfolded, and how the last act did not quite play out as Republicans had planned.

1. Republican House members were all over the steroids investigation in 2005, when they were in charge of running the place. Congressman Patrick McHenry, particularly, was avid in his grilling of Mark McGuire for alleged steroid use and basked in the media attention.

2. Two things happened to change Republican attitude: (a) the Republicans lost control of the House in the elections of 2006, and (b) George Mitchell, a prominent Democrat, issued his investigation of steroid use in baseball, implicating (among others) Roger Clemens.

3. With Democrats now in charge of the House Committee on Oversight and Government Reform, Roger Clemens himself requested a hearing -- in fact, insisted on it, even with the committee's Democratic chair and ranking Republican member trying to talk him out of it. Then Clemens went and met with committee member Rep. Virginia Foxx and others on the committee so that everyone was well coached on how to help Clemens look "clean" and to make the other guy look "dirty," and to make sure Rep. Foxx had her visual aids in order and understood the points she was supposed to make in displaying them. One curious talking point everyone clearly agreed on: the Republican members would say that it was all the Democrats' fault that the hearing was happening, even though Roger Clemens had demanded it.

4. Committee member Rep. Patrick McHenry decided (with amazing prescience, as it turned out) to duck out of the hearing and not take part.

5. Rep. Virginia Foxx made a spectacle of herself, first denouncing (according to the script) the Democrats for holding the hearing in the first place and then trying to practice diagnosis via glossy blowup to prove Clemens innocent.

6. With the fall-out from the hearing turning very negative for Clemens and his Republican cheerleaders, McHenry tried to distance himself by saying that steroid use by professional athletes shouldn't even be a subject for Congress to examine, hoping that no one will remember # 1 above.

7. With the negative press particularly bad for Rep. Foxx, she tried to distance herself by saying she was never on Roger Clemens' side in all this, hoping that no one will remember the last 48 hours of her public life.

Moss has a theory on why Foxx, McHenry, and other Republicans climbed on the Clemens trolley just as it was going over that cliff, a theory that involves the druthers of the ever-lovin' Bush family, and we'll leave it to you to weigh and evaluate that theory. As loath as we are to believe in conspiracies, the unlikely tawdriness of Madam Foxx's toady act on behalf of Roger Clemens might also make use expect to see beacons of shining truth fly out of her alimentary canal in the very near future.
Posted by J.W. Williamson at 2/19/2008 10:46:00 AM
Email ThisBlogThis!Share to TwitterShare to FacebookShare to Pinterest