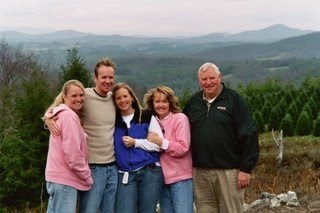 That's the man who's stepped forward to take on Madam Foxx, Coach Roy Carter, on the right, with his wife Patricia next to him, and their three children, Stacey, Todd, and Andrea.

And that's his Christmas tree farm in the background, along with a good swath of Ashe and Wilkes counties in the frame.

Coach Carter will be a featured speaker at the Democratic Fall Rally in Boone on September 29th at the National Guard Armory.

His campaign's not gonna be a game of powder-puff beanbag. He's got his eye on Foxx's record (atrocious in almost every way), and he knows her penchant for refusing to listen to constituents. His own roots as an educator and role model in Ashe, Wilkes, and Surry counties give him an automatic political base that will grow as people come to know him. He's as open and warm as Foxx is rigid and scolding. (Carter's web presence is under construction and should be up soon.)

Meanwhile, in the NC-10, a Navy hero is emerging as a Democratic challenger to Patty McHenry. Daniel Johnson, 31, was recipient of the Navy Marine Corps Medal for saving the life of a fellow crewmate following an accident on the USS Blue Ridge in 1999. In the process, Johnson lost both his legs below the knees. Though his hometown is Hickory, he's been an assistant district attorney in Wake County for three years. Apparently (and according to the Hickory Daily Record), the DCCC is involved in the recruitment push to get Johnson into the race.

Drama Queen has posted on BlueNC what conservative columnist George Will wrote about Johnson in 1999 after the heroics on the USS Blue Ridge. Johnson is going to be attractive to 10th Dist. Republicans, we think is the point, especially as McHenry has alienated many in his own party.

Ditto Foxx in the Fifth Dist. With Carter and Johnson emerging as challengers to our particularly glum status quo, we're beginning to get excited about 2008.
Posted by J.W. Williamson at 9/13/2007 10:46:00 AM
Email ThisBlogThis!Share to TwitterShare to FacebookShare to Pinterest