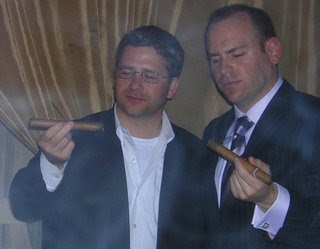 Donnie Young of Hickory was replaced several days ago as leader of the N.C. chapter of the Christian Coalition. Young is fairly notorious in these parts for openly criticizing Rep. Patrick McHenry.

On July 28, 2004, Donnie Young - former Chairman of the Burke County Republican Party, filed a complaint with the North Carolina State Board of Elections regarding the illegal activity being conducted. In his letter, he mentions that “five or more young people” have been registered at McHenry’s address. Young provided the NCSBOE with creditable information that confirmed that Michael Aaron Lay was a resident of Tennessee. NC Conservative

See another Donnie Young post about McHenry here, but the complete file on McHenry is at Pat Go Bye-Bye, where Drama Queen is all over his associations. It was Drama Queen who first posted the cigar photo of McHenry (on the left, with a pal), and wisely commented, "There are no words."
Posted by J.W. Williamson at 9/04/2007 09:10:00 AM
Email ThisBlogThis!Share to TwitterShare to FacebookShare to Pinterest