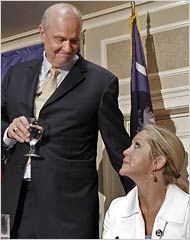 The struggle at the top of the (undeclared) Fred Thompson presidential campaign appears to be a case of nobody's being able to work with Jeri Kehn Thompson, Ole Fred's much younger wife, who was herself a political operative once upon a time.

Many of Thompson's top dudes were either fired or walked off the job this week.

Thompson's failure to announce his candidacy back on July 4th, and hence his failure to register his fundraising with the proper authorities, now appears a dodge to conceal how poorly he's doing raising the bucks ... which is a huge surprise, actually, since his team was trying to hype his mojo all summer. They've been feeding the impression that he can amble to the nomination because the conservative grassroots are so head-over-heels about him, and the money spigots were flowing.

"...there are concerns about a summertime drop-off in enthusiasm and fund-raising," which may not flat-out be a BAD sign but sure as shootin' ain't a GOOD one either.
Posted by J.W. Williamson at 7/28/2007 09:42:00 AM
Email ThisBlogThis!Share to TwitterShare to FacebookShare to Pinterest