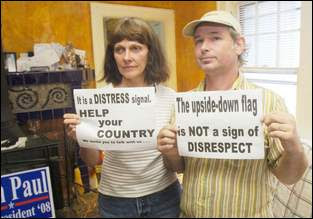 Man, oh man. Shades of Craig Dudley getting visited by the Secret Service in li'l ole Watauga County! Now an Asheville couple is roughed up by a Buncombe County sheriff's deputy and put in jail for using the American flag as an instrument of free speech.

It's sometimes problematic (can we get an "amen"?) to base our understanding of the facts on a newspaper account, but the following seems fairly clear:

1. Mark & Deborah Kuhn (pictured left) displayed an upside-down American flag on their Asheville property to signal their disgust with the direction of the country. They pinned signs to the flag, the ones they're holding here along with a picture of George Bush and the words "OUT NOW." From the evidence of the photograph to the left, they're Ron Paul supporters.

2. A person or persons unknown (perhaps the mystery man dressed in Army fatigues who Deborah Kuhn says appeared at their front door one day to harass her husband about the flag display) complained first to the Asheville city police and then to a sheriff department deputy, maintaining that the flag display broke the law.

3. An Asheville city policeman investigated, found the Kuhns okay, and went away like a smart officer of the law. The Kuhns were exercising their constitutional right on their own property.

4. The Buncombe County sheriff's deputy who came to their door was not similarly smart. First, he was pushing his weight around in the jurisdiction of the city police, and second, he evidently lost his head or was suffering from excess testosterone that day, for he announced he was placing the couple under arrest for the grave offense of displaying dangerous opinions on an upside-down American flag. The Kuhns' front door got broken, the deputy's hand got cut, and this American couple spent some hours in jail.

If this particular deputy is (a) still carrying a gun or (b) still in a position to rough up citizens in or around the city of Asheville, we would have to question the judgment, nay, the fitness for office, of his boss.
Posted by J.W. Williamson at 7/26/2007 01:48:00 PM
Email ThisBlogThis!Share to TwitterShare to FacebookShare to Pinterest