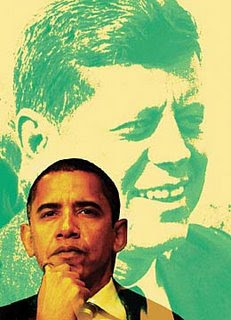 Ted Sorensen, who worked for JFK, points out some fairly striking similarities between Barak Obama's candidacy and John Kennedy's long-shot run in 1960.

JFK was a first-term senator when he ran for president. Ditto Obama.

JFK was considered too young and inexperienced by the party establishment. Ditto Obama.

JFK's cultural heritage -- Irish Roman Catholic -- equalled "unelectable" in many people's minds. Obama is "that black guy" (or a term less circumspect) with a strange name.

JFK focused his campaign on "hope, a determination to succeed despite the odds, dissatisfaction with the status quo, and confidence in the judgment of the American people." Ditto Obama.

JFK attracted the young, the disconnected, first-time voters, and independents "at the grassroots level, a phenomenon that initially went almost unnoticed by Washington leaders and experts too busy interviewing themselves." Ditto Obama.

What Sorensen doesn't say is that JFK was the only candidate who could stop Lyndon B. Johnson in 1960. Obama is clearly the only Democrat who can stop Hillary in '08.
Posted by J.W. Williamson at 7/19/2007 01:08:00 PM
Email ThisBlogThis!Share to TwitterShare to FacebookShare to Pinterest