State Board of Elections Will Hear Watauga Case Next Thursday 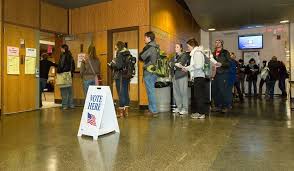 Some take-aways from the media report below on the attempt by some 34 NC county boards of elections to make an end-run around the Fourth Circuit Court by limiting Early Voting this November:

1. Watauga County is one of only two counties whose BOE didn't even hold a vote on Early Voting plans.

2. Because of that, the Early Voting cases for Watauga and Cumberland will go first before the State Board of Elections, who will determine whether Stacy C. Eggers IV ("Four") is right in his scheme that the SBOE has no jurisdiction to set an Early Voting plan for a county that didn't adopt a plan.

3. That crucial meeting of the State Board of Elections will take place next Thursday, September 8, at the SBOE offices in Raleigh (441 North Harrington St, Raleigh, NC 27603). No doubt, the Watauga case will come up in the morning session.


[According to Talking Points Memo:] To make the state of play even more complicated, the election boards in two of the 34 counties whose plans are in question never even took a vote and it’s unclear whether the state board has jurisdiction to implement a new plan. If not, the early voting protocols would default to early voting during only weekday business houses along with one Saturday morning, and offered solely at the county elections office.

“Which, in these two counties, Watauga and Cumberland, that would catastrophic,” Riggs said. Watauga is home to Appalachian State University, while Cumberland includes a military base and Fayetteville, one of North Carolina’s largest cities. Overall, 56 percent of North Carolina voters used early voting in 2012.

The State Board will hold hearings next Thursday on each of the disputed county plans.
“I think the State Board of Elections is unrealistic right now in thinking that they're going to get 34 of these heard in one day. I’ve seen three of them take two hours,” Riggs said.

Joshua Lawson, the general counsel for the State Board of Elections confirmed the scheduled hearing for the 34 county plans, including for the two counties where part of the discussion will be whether the state has jurisdiction. Asked about the concerns raised about the lack of early voting opportunities in some counties, Lawson said the state board will make a "data based decision” regarding each dispute.

So should we plan a hundred-car cavalcade down there, or stay here and prepare for rioting?

In a presidential election year, it makes NO sense to severely restrict early voting opportunities to just one site because the Republican members of the BOE failed to vote on a plan. I truly hope that the SBOE does not reward the irresponsibility of the Republican members of the Watauga BOE by forcing the county to adopt the "default" plan - early voting only at the BOE office.

Jerry, I saw this in the News and Observer. It sounds as though the SBE has accepted Bill Aceto's belated decision to offer up a One-Stop Plan, even though he didn't meet the deadline and his new "proposal" that consisted of his OLD proposal that he submitted before the ruling of the court. See the pertinent paragraph from the N&O below: Read more here: http://www.newsobserver.com/news/politics-government/election/article100426527.html#storylink=cpy

“The Watauga County Board of Elections did not initially vote on an early voting schedule, but Republicans and the Democrat on that board have now submitted competing proposals, according to the State Board of Elections. The state board will meet Thursday morning to settle disputed early voting plans in 33 counties, including Wake, Orange, Mecklenburg, Franklin and Harnett.”