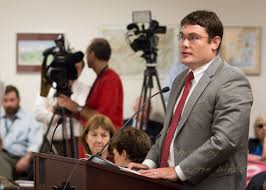 Aceto had earlier -- you'll recall, perhaps -- based his whole blueprint of inaction on Mr. Eggers' legal memorandum that the state BOE had no authority to set an early voting plan for Watauga, once the local board had failed to do its job.  Eggers Aceto subsequently wrote his memo to the state saying a single early voting location at the local BOE offices would be "adequate," in his opinion. He was in a legal sense defaulting. He was also in a practical sense skating over a pit.

Aceto continued to skate right up until Wednesday of this week, just hours before the SBOE was scheduled to meet to determine Watauga's fate, along with 32 other counties. By Wednesday, he had discovered conclusively that indeed the state BOE intended to treat Watauga like any of the other 99 counties in North Carolina and not as some special case exempted via a "lack of jurisdiction" claim.

Democrat Stella Anderson had submitted her plan by the deadline, backed up with charts and graphs of data dealing with (the required-by-statute) demographic, geographic, and partisan data . With the deadline for submission gone by, up pops Aceto scant hours before the hearing was set with an email saying he wanted his plan considered after all. (Apparently, deadlines are wholly porous if you're the Local Republican In Charge.) So Aceto skated on down to Raleigh yesterday, confident.

First thing that happened, Four Eggers' now famous "jurisdictional" argument simply evaporated. Poof. The only people who raised it were a couple of attorneys there to argue the law if necessary, but it was never necessary. Bill Aceto is not -- truth be told -- good on his feet, and without Four Eggers there to tell him what to say....

It was never in doubt: The state BOE can decide our fate, and they did.

(I sat directly behind a small gaggle of lawyers, none of whom I'd ever seen or met. They were buzzing at the beginning of the Watauga case about Four Eggers' legal memo. One turned around to me: "What happened to the whole 'you don't have jurisdiction' argument?" I shrugged. Did he know I had written about the Eggers' legal memorandum?)

Deciding Watauga's Voting Fate
The Republican board members came to the table already determined to give Aceto what he wanted, which was fewer hours than the Anderson proposal and a site at Legends rather than the Student Union, and they were very willing to throw Aceto numerous life-lines. (There'll be a subsequent post here, with color commentary, on those sterling SBOE public servants and their collective and individual behavior in the marathon meeting yesterday.)

The real sticking point last night was Chancellor Sheri Everts' refusal to surrender Legends for early voting. (It's unsuitable in many respects, which Anderson had clearly and thoroughly outlined in her submission, and is a revenue-producing venue for bands and dancing.) Anderson had submitted Everts' letter of denial to the SBOE, with ASU General Counsel Dayton Cole's covering letter saying "this is a negative response to your request," but Republican SBOE member James Baker just couldn't get past the fact that he couldn't find the exact words, "Get the hell outta here about using Legends!" in Everts' letter, so he muled and hemmed around like some sit-com character: "What is the Chancellor saying? Oh, my! I don't know! What does it all mean?" (That Baker is a source of barely concealed embarrassment, even to his fellow Republicans, is palpable.)

Republican board member Rhonda Amoroso began to cheer-lead for Legends. She volunteered that she had once driven past the place, and it looked fine to her. "I couldn't find the Student Union," she added, which she intended as a major indictment of its suitability.

"Six thousand voters did find it just fine last March," I shouted from the back of the room. Well, I didn't actually, but I came damn close. (Having waited in that fetid cattle car of a meeting room for over ten hours for the Watauga case to be called, I didn't want to be thrown out at the moment of truth. So, yes, I chickened out.) The Board members, some of whom claimed they were all about "the data," had either never looked at the early voting statistics in Watauga (provided by Anderson), or, if they had ... meh, data schmatter.

Republican SBOE Chair A. Grant Whitney, the Blutto of the Republicans, growing more and more impatient with the whole Watauga drama and seeing no way he could put the knife in Anderson's chest and get away with it, suggested the "compromise" that Mr. Baker put into the form of the motion that passed 3-2 (with the two Democratic members voting no):

I believe -- and other people heard him say it -- that Aceto commented that the motion put him in an impossible position. Other people in the room said they heard very clearly the cracking of ice.

So now Bill Aceto and Four Eggers, who up until last night have willfully disrespected and/or ignored Chancellor Everts, and whatever NC GOP goon squad Eggers can recruit for the job, will all now until next Tuesday be assaulting the Chancellor, urging her to give in, give up, surrender on the issue of Legends. Next Tuesday at 5 p.m. is zero hour, when perhaps hell freezes over at last. 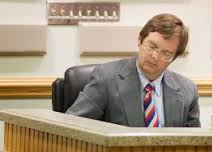 What Was Bad Last Night for Four Eggers?
Bill Aceto was forced by Democratic SBOE member Joshua Malcolm to admit that he had gotten Four Eggers to write read and approve his plan before submitting it, further evidence -- as though we needed it -- that Four Eggers is the be-all and end-all of ballot-access in Watauga County, while also serving the Republican majority on the County Board of Commissioners. He has been in my opinion operating for years with a clear and persistent conflict of interest.

The main issue in the November elections -- so far as the County Commission is concerned -- is ending the corrupt accretion of power in county government of the Eggers Eggers Eggers & Eggers law firm.

What Was Terrible for Nancy Owen Last Night
Nancy Owen, Bill Aceto's fellow Republican on the Watauga BOE, is justifiably notorious now for failing to second Aceto's early voting plan at the August 15 meeting of the board. Back last July I had described her as a "mute stump," which was just mean. She failed to show up for the mandatory state Board of Elections two-day training sessions last month (or was it July?), and she failed to show up in Raleigh yesterday. The only time the SBOE has  actually experienced her existence was when she was forced to be on the February 10 teleconference with the SBOE (over the March primary early voting plan) because Aceto was missing, and someone had to answer questions about the "majority" Republican plan. She embarrassed herself. Or rather Eggers-Aceto set her up for embarrassment. She couldn't answer questions. She didn't understand anything about the Judge Stephens order. She'd been kept in the dark.

Last night, SBOE Chair Whitney suddenly asked Aceto, "Would you tell me where the third member of your board is? I would like to know who that member is and why she isn't here. And why she didn't second your early voting plan in August." Whoa!

Other Super Bad Moments for Bill Aceto
Bill Aceto had some papers in his hand which he waved at the board members in his attempt to convince them that there has been major election law violations -- outrageous electioneering -- committed at the ASU Student Union in the past. Stella Anderson had pointed out that no electioneering reports had ever been filed with the local BOE because of the Student Union. Aceto: "Here are some!" and he passed up his pieces of paper ... which turned out to be hair-on-fire accusations written up by Watauga Co. GOP Chair Anne Marie Yates and her daughter about supposedly terrible things they had supposedly witnessed, and which they sent not to the BOE as an official report but to the NC GOP as partisan buffalo dust.

Before that moment Malcolm had questioned Aceto closely on exactly how he had "negotiated" with Chancellor Everts for the Legends site. "Is it true, sir, that in your letter to the Chancellor, you warned her that she was not to even consider the Student Union as a possible site for early voting." Why, yes, Aceto admitted, so Malcolm evaluated his negotiating skills: Why would you do that? Malcolm asked, appending a condemnatory "Sir?" to the question. Why would you open supposedly good-faith negotiation by announcing that you would not even consider one viable option?


Here is the link to the Watauga Case video posted by WRAL: "State board sets early voting schedules, Part 2." The Watauga case begins at 4:55 and is fraught with bad sound and the occasional glitch.

Why Legends? WHY a smelly nightclub used by Appalachian as a venue for students to gain experience in event planning?

Watauga GOP has never made clear WHY Legends is the place to replace early voting. It's NEVER been used for early voting. The behavior of local Republicans is just awful!

Fascinating acrobatics on full display. Another evaporation - poof - is the brilliant piece of advice Eggers gave Aceto so convincing that the COB OfficeS include the commissioners board room in the Admin building. When asked if anybody took issue with the "in lieu" site Aceto acted as he knew nothing of it. Poof. It never happened.

Thank you so much for all the time and effort you put into keeping an eye on these slime balls. Hoping someone is urging Sherri Everts to stand her ground? Loved reading this! Too bad they seem incapable of humiliation for their shenanigans.

Your commitment and intelligent, "fair and balanced" reporting are very much welcomed. It's frustrating having to expend so much energy combatting clowns, so more power to you and Pam.

Chancellor Everts has already told the SBOE that she will not approve Legends, so regardless of any letter writing efforts, that die has been cast. The partisan results are to be expected, and Everts has to be fully aware of them.

The deal is to change the composition of the County Commissioners.

I've attended several county Board of Elections meetings, and watched the hour or so of Thursday's SBOE meeting concerning Watauga's plan and I have to say that I am so impressed and incredibly grateful for Stella Anderson's intelligent and articulate presence on our county board. The entire board should be encouraging voting by making it more accessible to all, not less.