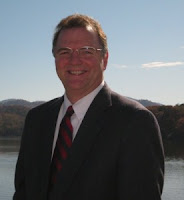 Kenny West ... Republican from Hayesville, NC, who ran for Congress in the NC-11 in the crowded Republican primary of 2012, a race that Mark Meadows won and went on to become the elected congressman. At the time he ran in 2012, West was also Chair of the Clay County Republican Party.

Apparently recognizing his own sinking campaign ship (he'd also run in the 2010 Republican primary, garnering only 7% of the vote), West gave up the race during the primary and endorsed Meadows (even though he had earlier hinted that Meadows suffered from a "character flaw" that made him unfit for office, a hint that was never spelled out).

West was in debt from the campaign, had raised only $11,000 (of which he had put in almost $6,000 himself), but Meadows rode to the rescue after his election in November 2012: "Meadows began to make payments to West out of his campaign account three weeks after the general election. By the time West filed his termination report with the FEC, Meadows had paid him $6,400. The Meadows campaign would ultimately pay West a total of $11,200 from Nov. 26 to Jan. 1. The listed purpose for five of the seven payments was 'Compensation.' For the final two payments, it was 'Compensation - Transition.' West did no paid work during the campaign, according to FEC reports and to people involved in the campaign."

Then Meadows elevated West as his Chief of Staff in his Capitol Hill office, which was followed closely by numerous complaints from female employees that West was a sexual harasser, or just a plain ass:


A person close to Meadows said he personally observed West's behavior around women before he was offered the job, and warned Meadows about West. "There were a number of us who talked to him and basically said, 'You have a problem here,' before he ever got sworn into office," he said. His behavior apparently didn't change in the congressional office. "I've heard that basically since day one," the source said.

"I don't know if it's just his personality, but I know he paws on people. And I do know within his office, there have been a lot of complaints. As one of his staffers told me, 'The son of a bitch has had a complaint on him by every woman in our office.'"

A second source close to Meadows said that West's behavior stuck out. "I'm as mountain-boy, country-hick as they come," this person said. "But you know how to talk in front of women; you know how to talk in a public crowd. And there's a way that you talk at a bar with your friends versus otherwise. And Kenny would thump his Bible all holier than thou and then make off-color comments, and it was kind of one of these where it was, 'OK, is he being funny? Is he being serious? Is he just stupid?' And to be perfectly honest with you, that's not like Meadows at all to put up with that. I know for a fact and I've heard from at least three of the women that he was completely inappropriate and complaints were filed [with Meadows]."


A third source who previously worked in Meadows' office said that West was "weird" around women and that one of the things that often made female staffers uncomfortable was his insistence a woman hold hands and pray with him. "I know that the whole 'hold my hands and pray' thing was not unique to me," she said.

Congressman Meadows banned West from the Washington office but kept paying him, then exiled him to an office in the 11th District of NC, and then cut him off with a sizable severance pay that has prompted an ethics investigation.

So the question is hanging out there: What did West know about Meadows (the "character flaw") that would earn him such a payoff?

Posted by J.W. Williamson at 10/09/2015 10:16:00 AM
Email ThisBlogThis!Share to TwitterShare to FacebookShare to Pinterest
Labels: Kenny West, Mark Meadows