Raleigh GOP: Dead Set Against 'Pork Barrel' Until They Get Their Hands on the Pork 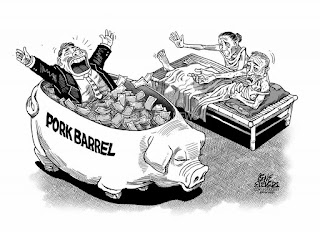 We're finally learning what powerful Republicans in the General Assembly slipped into the state budget bill to improve their own bragging rights with constituents. Some of it -- particularly what Speaker of the House Tim Moore scored for his home county of Cleveland -- has been known for some time.


But first ... the baseline for the rank hypocrisy:


"The Republican civic religion is that government is the problem and no problem can be solved by throwing tax dollars at it." [Gary Pearce]

Other that Speaker Moore's particular pork detailed at the link above, here are some more choice slabs of bacon doled out to districts where Republicans rule:


$1 million for the High Point downtown library "plaza project." Sen. Trudy Wade got language inserted into the budget bill: $1 million to be remitted to "a city with a population between 105,000 and 110,000 located in a county that changed its state poverty ranking last year." The only city that matches that description is High Point, and that's how the pork barrellers do it ... try to hide the recipient with highly specific language that only one town fits.

$100,000 for Lincolnton, which didn't ask for it, but it's home to Rep. Jason Saine, chair of the Finance Committee.

$100,000 for Reidsville, which didn't ask for it, but it's home to Clayton Somers, Speaker Moore's Chief of Staff.

$100,000 for Smithfield, which didn't ask for it (“It was a complete surprise,” said Sarah Edwards, director of the Downtown Smithfield Development Corp.), hometown of Rep. Leo Daughtry, a longtime Republican legislator whom Speaker Moore appointed to lead two House committees.

$100,000 for Rutherfordton, where House Majority Leader Mike Hager gets to brag.

$2 million for an airport tower at Jacksonville, inserted into the budget by chief Senate budget writer Harry Brown.

$10.96 million for a new middle and high school in Jones County, also inserted into the budget by Sen. Harry Brown, making him the Grand Master of Pork in the 2015 General Assembly.

I'm not opposed to any of these projects, and that's not the point. All are worthy expenditures of money, no doubt. It's the process that's corrupt to the core. Powerful people in high places skimming for their powerful friends. The odor of the hypocrisy is enough to gag a slaughterhouse worker. Republican legislators who whined in unison when others doled out the earmarks are now grabbing the cash while the grabbing's good.

And pretending that they're still pure like the driven snow.

I agree with what you have said. The process is corrupt. I wouldn't expect the legislators that benefited to say anything. They should if they were principled.

My question is why didn't Republican legislators like our Rep Jordan say anything. I would have been screaming from the mountain tops. They have some extra money to do these things, but public education gets underfunded. And, saying public ed got underfunded is as nice as I can put it.

Seems like some legislators are scared to stand up to the "leaders" in the party for what is right.

There may be some similar projects in other districts that are just as or more worthy of state funding than these projects. But we'll never really know - if you're not on the Republican's voting radar, you just get ignored.