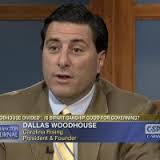 The new executive director of the North Carolina Republican Party, the ineffable Dallas Woodhouse, is now being implicated in some seriously wrong campaign shenanigans from last year, shit that should put him in deep doo-doo with the IRS.

As one of our fair state's most notorious political operatives -- past head of Koch-funded Americans for the Prosperous, for example -- Dallas Woodhouse formed a 501(c)(4) with the IRS in March 2014, a tax-exempt "social welfare" org called "Carolina Rising," which despite everything to the contrary claimed by Mr. Woodhouse on his paperwork had as its solitary goal the election of Thom Tillis to the U.S. Senate.

Carolina Rising raised just shy of $4.9 million, $4.8 million from a single individual (whose identity remains secret, under the rules of a "social welfare" org). According to an investigation by Open Secrets, "nearly all of that [$4.9 million] went out the door to a prominent political media firm in Virginia for ads mentioning Tillis, while the rest was spent on payments to an LLC started by Woodhouse only months earlier." (Hattip to Greg Flynn, who was first at reporting something fishy about Carolina Rising.)

So Woodhouse personally benefitted, but that isn't even the illegal part. The ads mentioning Tillis, and mentioning him exclusively, violates the "private benefit" rule for 501(c)(4) orgs. It's a no-no with the IRS for Carolina Rising to exist for the sole purpose of trying to elect a single candidate.

(In the 1st link above, there's a video of a very drunk Dallas Woodhouse being interviewed on camera by a reporter on Election Night in 2014. In that interview, Woodhouse blatantly brags that he spent $4.7 million to elect Thom Tillis. The remainder of the $4.9 million he raised mainly went into his own pocket.)

Citizens for Responsibility and Ethics in Washington filed complaints with the IRS accusing Carolina Rising and another 501(c)(4) group (one working exclusively for GOP presidential candidate Marco Rubio) of violating the law.

The IRS mill grinds slowly, but it grinds exceeding fine. We'll be interested to watch where this goes and how Mr. Woodhouse continues to comport himself as head of the North Carolina Republican Party.

FOOTNOTE
Judy Wilburn, a Yadkin County school teacher who was featured in one of Carolina Rising's television ads for Thom Tillis in 2014, has been charged with assaulting a handicapped student.