The North Carolina Connection to the Downfall of Kevin McCarthy

At 8 a.m. yesterday morning, as Republican House Majority Leader Kevin McCarthy was approaching a noon nomination and probable election in the Republican House Caucus as the new Speaker of the House, he received an email from a conservative Chicago activist with the subject line, “Kevin, why not resign like Bob Livingston?”

Bob Livingston, O my brethren, was the replacement Speaker chosen by the Republican caucus back when a sex scandal drove Newt Gingrich out of the House in 1998. Livingston was promptly scuttled by his own sex scandal. That's when the Republicans of that day found Denny Hastert hiding in a back room and elevated him to the speakership, because everybody said that Denny had never had sex with anyone (little did they know!).

Anyhoo, according to Huffington Post, the "why don't you resign" email yesterday morning amounted to a threat of being outed publicly for an alleged romantic, extra-marital affair with North Carolina Congresswoman Renee Ellmers. Ellmers, as a matter of fact, was also a recipient of that 8 a.m. poison email. Apparently, if you're anybody in DeeCee, or hang out at the Capitol Lounge or the Tune Inn on Capitol Hill, you've known about the McCarthy-Ellmers rumor for months! 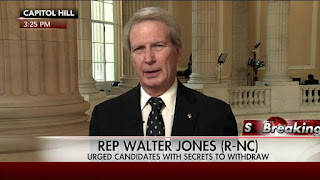 Following that 8 a.m. threatening email, McCarthy was then treated to a very public letter written by NC 3rd Dist. Congressman Walter Jones, which contained its own potent threat. Though the letter was addressed to the Republican Conference Chair, who would be running the caucus meeting at noon, it got wide distribution and without any doubt got into the hands of Kevin McCarthy.

Jones wrote, "With all the voter distrust of Washington felt around the country, I am asking that any candidate for Speaker of the House, majority leader, and majority whip withdraw himself from the leadership election if there are any misdeeds he has committed since joining Congress that will embarrass himself, the Republican Conference and the House of Representatives if they become public."

What did Walter Jones know and when did he know it?