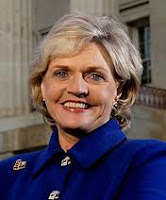 It'll now come down to the veto-override vote in the NC House. One of the Five Goobers who voted last year to override Perdue's veto of the last Republican budget told the News&Observer, “They don’t have the votes to override, and they know it,” without enunciating, by the way, exactly how he might vote.

WRAL is running a "veto override watch," paying particular attention to the Five Goobers and other Dems who voted for this budget before it went to Perdue.

Governor Perdue is the most unpopular governor in the nation. This is why. She is losing her mine.

Yes, Anon, a mine is a terrible thing to waste.

Have you ever thought of reading over your super-important thoughts before hitting "Publish Your Comment"?

I wish she would have run for reelection. She has a backbone.

Henery, did you understand what was said? Have you ever made a typo or are you the perfect liberal?

I wish she would run again too! Most of us Republicans do!

Fine. Then let the state default.

I won't claim she's governed effectively, but I do think her numbers are bad at least in part because she chose not to run again. That certainly reads like she's not up to the task.

But, I must say, at least we don't have Rick Scott as our governor. He must be relieved that Bev has knocked him off the top of the worst governors list. I know a lot of people from Florida and from what they say he's been a real disaster. Perdue may not be great but I don't think she's caused the state any lasting harm like Scott is in FL.

I do think the current NC Legislature might cause the state real harm with their cuts to education and their waste-of-time, head-in-the-sand bills like amendment 1 and the one trying to manipulate scientific data about sea level.

Maybe if Purdue vetoes the budget, there will be time to do some discharge petitions.

Which cuts to education are you referring to. Please look at the numbers for 2009 to 2011 budgets and let us know how much the Democrats who approved that NC Budget gave to education.

Now, look at the fy 2011-2012 state budget, the first under the Republican legislature and let us know how much the Republicans budgeted for education.

Now, for fy 2012-13 school year, Republicans have proposed to increase the current budget for education and have provided for teacher pay raises. Perdue has vetoed this budget. What now? Back to the original 2012-13 budget without the increase approved by the Republican legislature? No raises for teachers and other state employees AS PASSED BY THE REPUBLICAN LED LEGISLATURE? Nope...Perdue vetoed those increases. Good luck with that!

Let's see, last year the Republicans, Soucek and Jordan included, said that they added thousands of teachings positions.
The truth, more than 3,000 teachers and assistants were fired in NC's public school.

Anon, I know it's difficult for you to grasp, but our schools receive some funding from Federal sources, some from the state budget and some from the counties.

The part that the state contributes is what the state legislatures/governor can be held responsible for. How much did the Republican legislature cut from the previous DEMOCRAT budget?

The truth, more than 3,000 teachers and assistants were fired in NC's public school.

If these weer non-performing teachers protected by tenure, it would have been a huge step forward.

The truth 1001 is that the legislators that you elect and support lie. Lie

According to DPI, 587 classroom teachers lost their jobs last year. Stop being a Democrat and tell the truth.

How many of the teachers were laid off because of "CUTS" by the Republican state budget? You people consider not RAISING the budget as much as you want to, a budget cut!