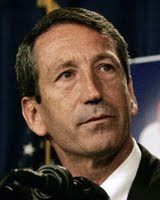 Impeach him for the highly public tickling of the fat potato-finger of lust? Not so much.

Instead, "the special [S.C.] House impeachment panel approved an official rebuke of Sanford for bringing 'ridicule, dishonor, disgrace and shame' on South Carolina, its citizens and the governor's office."

Not that anyone will ever notice the glaring inconsistency, that the censure route was not judged to be nearly severe enough for that ole randy goat Bill Clinton. It's just hard to cut your own livestock from the herd, right guys?
Posted by J.W. Williamson at 12/10/2009 12:24:00 PM
Email ThisBlogThis!Share to TwitterShare to FacebookShare to Pinterest
Labels: Mark Sanford