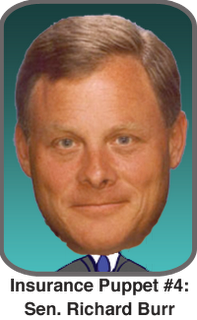 * In an interview with Fox News in September, Sen. Burr claimed that "no plan, currently considered or passed, in either the House or the Senate," extends coverage to all Americans. However, the Congressional Budget Office has estimated that House bill would cover 97 percent of Americans. [North Carolina Policy Watch, September 30, 2009]

* In a November radio interview with radio host Bill LuMaye, Sen. Burr said about the House bill, "It doesn't have reforms in it. The only reform that's really there is that we do away with preexisting conditions." In truth, however, the bill contains numerous other insurance reforms, including caps on out of pocket expenses and lifetime limits, as well as market accountability through health insurance exchanges. [North Carolina Policy Watch, November 17, 2009]

Thanks to Public Campaign Action Fund for blowing this particular whistle.
Posted by J.W. Williamson at 12/05/2009 11:55:00 AM
Email ThisBlogThis!Share to TwitterShare to FacebookShare to Pinterest
Labels: health care, Richard Burr