Piles of Toxic Coal Ash Near You 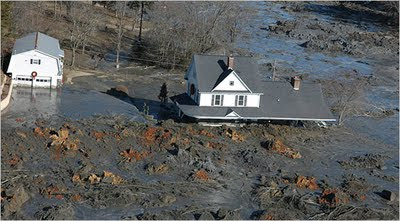 Coal ash is known to be full of arsenic, mercury, and a dozen other ingredients fit for a witch's brew, and Duke Energy's coal-fired power plants produce tons and tons of it every year. In the NC-5, "Duke had to shut down an old ash landfill at its Belews Creek plant in Stokes County last year after groundwater samples repeatedly broke state safety standards."

Some 2.7 million tons (million tons) of Duke's ash was piled out on the ground between 1992 and 2003 without protective liners that are now required at landfills.

We ain't begun to calculate the true costs vs. benefits of corporatocracy.

And don't even get us started on the fact that much of that coal comes from mountaintop removal mines north of here.
Posted by J.W. Williamson at 12/04/2009 08:37:00 AM
Email ThisBlogThis!Share to TwitterShare to FacebookShare to Pinterest
Labels: coal industry, corporate power, Duke Energy, mountaintop removal coal mining