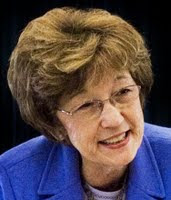 Those are some clear distinctions in the upcoming N.C. Dem primary, differences that don't in our mind tilt in Cunningham's favor.

In fact, Campaign Diaries is driven to perhaps the unkindest comparison one could make at this time: Is Cal Cunningham shaping himself to be North Carolina's Creigh Deeds, the recently defeated Dem candidate for governor of Virginia, who failed miserably to ignite his own base?

Thanks to the heavy thumb of the Democratic Senatorial Campaign Committee, Cal Cunningham today looks less like an attractive insurgent than like the good ole boys' boy.
Posted by J.W. Williamson at 12/13/2009 02:23:00 PM
Email ThisBlogThis!Share to TwitterShare to FacebookShare to Pinterest
Labels: Cal Cunningham, Elaine Marshall