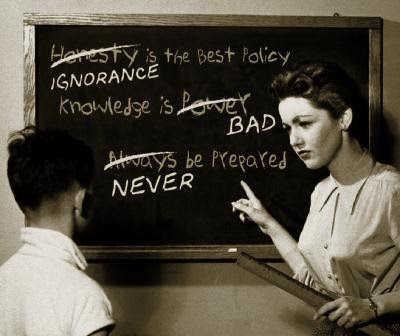 "Abstinence only" indoctrination for American teenagers has proven to be mightily productive of unplanned pregnancies and not much else, except pious posturing by conservatives who say they want government out of our lives except when it comes to teenager indoctrination. Yet abstinence only proponents are hoping that any new health reform legislation will empower their stupidity with more government money.

According to the WashPost, "The health-care reform legislation pending in the Senate includes $50 million for programs that states could use to try to reduce pregnancies and sexually transmitted disease among adolescents by teaching to them to delay when they start having sex," even though the budget signed by President Barack Obama earlier this year zeroed out such funding as hilariously ineffective.

Some powerful senator or group of powerful senators managed to squeeze $50 million back into the conservative trough, and if we know Obama the Great Compromiser, he'll go along with it.

Albert Einstein called it insanity: doing the same thing over and over again and expecting different results.
Posted by J.W. Williamson at 12/27/2009 11:11:00 AM
Email ThisBlogThis!Share to TwitterShare to FacebookShare to Pinterest
Labels: abstinence only, health care