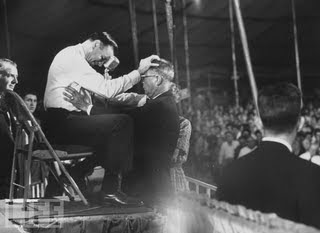 Trying to find some relief from marinating our noggins in the corporatocracy of Washington, D.C., and the craven Democratic Senate, and trying to avoid the growing thought that Democrats are no more capable of reform than the goddamned party of Virginia Foxx, I turn for relief to the obituary of Oral Roberts, the self-aggrandizing faith-healer of yore who died yesterday at the age of 91.

When I was growing up a rawboned teenager in West Texas, the TV in our house was tuned to Oral Roberts every Sunday afternoon. My mother totally gulped that particular display of righteousness, and so did I, wishing to please my mother and, naturally, the Lord.

"Be healed!" he shouted at men and women and little children, holding them firmly by the shoulders and then striking their foreheads with his open palm. Many fell backward, dazed by the power of God or of man and suggestion, into the waiting arms of two strong men strategically positioned for that purpose.

My mother totally believed. So did I, mainly, though there was maybe an occasional wee shadow of a doubt that crept through my synapses even at that age. I had been trained to recognize doubt as the voice of Satan, nothing less. But seeing the man on crutches have his crutches confiscated after being smote on the forehead by the Reverend Roberts, yet still require the strong assistance of those two evangelistic side-men to get back off the stage, could make even a devout 14-year-old risk eternal damnation and say, "Hey, wait a minute."

Well, Oral Roberts, your version of health care is gonna be more in demand, if the Democratic Senate (a.k.a., the for-profit Insurance Industry) has its way, and equally effective, most like.
Posted by J.W. Williamson at 12/16/2009 01:43:00 PM
Email ThisBlogThis!Share to TwitterShare to FacebookShare to Pinterest
Labels: health care, Oral Roberts, Senate Democrats