A Great American I'm Thankful For 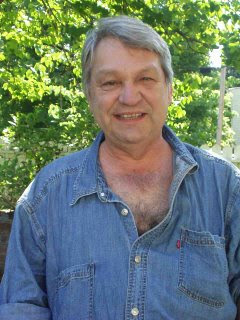 Although we ordinarily deplore impulse-buying, because we hate the relentless promotion of overpriced and useless stuff that we're supposed to be mesmerized into buying, at "Low Low Prices," how were we going to pass up a book titled "Deer Hunting with Jesus"? Turns out ... we couldn't pass it up, and we hit the jackpot for once.

I've read Joe Bageant before, so I knew he writes with a whip-crack style and can make me laugh out loud. He's a self-described "redneck liberal" from the Virginia backcountry and comes from the same cultural strain that birthed me, white trashonomics, where "alcohol, overeating, and Jesus are the preferred avenues of escape." He writes about the real America without pretense, without sentimentality, and without shyness. He pisses in the liberal punchbowl with as much gusto as he hoses the smug Republican rich, so he's an equal opportunity offender. I thank God he's in the world.

The subtitle of his book of essays is "Dispatches from America's Class War," and he has a deep understanding of economic resentments and the massive inequities that have only gotten worse through seven years of El Presidente, partly because white working-class people have invested so heavily in fantasies about "equality" and "opportunity." According to the U.S. Census, at least 35 million American workers can't crack $35,000 a year, and that's with two people working! It's worse than that for some 19 million American workers who are actually below the official poverty line. More than half of them are white. They're the working poor, but they won't let themselves admit it because the myth is that there is no excuse for a white person to be poor in America. No reason but a lack of worthiness. To admit you're a poor white is to admit you're a natural born loser. Better to live the illusion that you're "middle class" and pump up that credit card debt in order to own all the stuff that we're told every relentless hour on TV we MUST own to be fully respectable in George Bush's America.

The middle class, both liberals and conservatives, are utterly dependent on my people, the great throng of the underpaid, undereducated, and overworked. This is not whining, just a simple statement of fact. We are the reason inflation stays low and the private retirement accounts of the middle class have remained stable. Meanwhile, the working class is left entirely dependent on the Social Security program, which eventually will be slashed and privatized by some backdoor method by the ownership class in order to boost (in a wonderfully self-serving loop) the stock market, which serves primarily the upper middle and upper classes. It is easy for conservatives, who were born into the upper quarter and have never needed entitlement programs, to be against them. For liberals born in that quarter, being against them is only slightly harder, morally speaking. You endorse affirmative action at the cocktail party, then bitch afterward about Shaneesa or Marta leaving streaks on the granite countertops when she wiped up the party slops.

Joe Bageant has his own website, where you can both read some of his essays, or reactions from readers of "Deer Hunting with Jesus," and where you can also order his hilarious, sad, true, excoriating account of what it means to be two late payments away from homelessness in America.
Posted by J.W. Williamson at 11/26/2007 12:56:00 PM
Email ThisBlogThis!Share to TwitterShare to FacebookShare to Pinterest