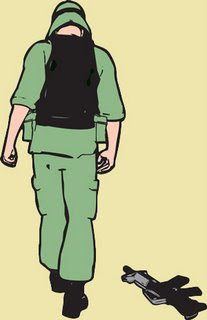 The AP is reporting that U.S. soldiers are deserting their posts at the highest rate since 1980.

There's been an 80 percent increase in desertions since the U.S. invaded Iraq in 2003. Some 4,698 soldiers have deserted this year, compared to 3,301 last year.

From the AP report:

The increase [in desertions] comes as the Army continues to bear the brunt of the war demands with many soldiers serving repeated, lengthy tours in Iraq and Afghanistan. Military leaders -- including Army Chief of Staff Gen. George Casey -- have acknowledged that the Army has been stretched nearly to the breaking point by the combat. And efforts are under way to increase the size of the Army and Marine Corps to lessen the burden and give troops more time off between deployments.

This news lands on our doorstep in the context of a presentation we heard by a young Marine and Iraq War vet this week. He has started "Bake Sales for Body Armor," a grassroots operation to raise independent money to equip soldiers in the Iraqi theater with hardened body armor, something our own military and government continue to fail to do. On the website linked above, this depressing statistic: "...a Department of Defense Study ... showed that 74 out of 93 Marines killed between March 2003 and June 2005 could have been saved by side protecting body armor that was not being provided for our troops."

For all the money we've spent and continue to spend over there, our leaders can't seem to do the simplest things to protect soldiers on patrol from IEDs. Hence homegrown and underfunded efforts like "Bake Sales for Body Armor."

Maybe Madam Foxx would like to buy some brownies, in between her photo ops with veterans.
Posted by J.W. Williamson at 11/16/2007 03:31:00 PM
Email ThisBlogThis!Share to TwitterShare to FacebookShare to Pinterest